Such a pretty lady, and such a tragic ending. I have already come to the conclusion that that is the reason I am drawn to a lot of these stars. As I have stated before (and if not, will state here and now) I am a total death hag.

Martha Mansfield is another one of those silent stars that is not remembered anymore. I think if she is remembered, it is either for her death, or for her role in Dr. Jekyll and Mr. Hyde with John Barrymore. I had a chance to a screening of the film last October at the Redford Theatre. It was an amazing movie and a great night! Also, the fact that photographer Alfred Cheney Johnston took many, many pictures of Martha will help to keep her face around for years to come.

Martha Mansfield was born Martha Ehrlich on July 14, 1899 in Mansfield, Ohio. She was raised in New York by her mother after her father left the family.


She began showing an interest in performing and by age 18, she was a regular performer on stage. She eventually made her way to the Ziegfeld Follies stage. (I always love the starlets rise through the Follies...so jealous!) She wasn't a huge star in the Follies, but famed Ziegfeld photographer, Alfred Cheney Johnston obviously had a favorite. He loved to photograph her. 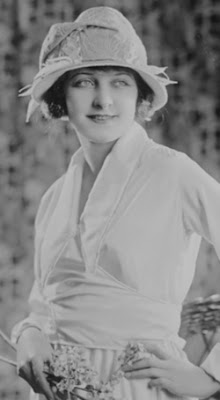 Martha soon made her way to California and began to appear in movies. Her most famous performance was Dr. Jekyll and Mr. Hyde in 1920. She appeared in over 30 movies.

On November 30, 1923, Martha was in Texas filming her next movie, The Warrens of Virginia. During a break in filming, a cast member tossed a match and it landed on Martha's period costume. The costume immediately went up in flames. Leading man, Wilfred Lytell, her leading man in the movie, threw his overcoat on top of Martha, saving her face and neck from the flames. Those helping her remove the dress received terrible burns on their hands, but they did succeed in putting out the flames. Nevertheless, Martha was left with burns all over her body.

She was taken to a hospital in San Antonio where she died less than 24 hours later. She was only 24 years old. Her body was flown back to New York City where a funeral was held and she was interred at the Woodlawn Cemetery in The Bronx.

And...as usual...few of her films survive. I have only seen one that is available for viewing.


The entire Dr. Jekyll and Mr. Hyde film with Barrymore and Mansfield is available online, in segments and its entirety. You can get there through Youtube, or rent it from your local library like I did! Always gotta rave about the libraries out there. :)
Posted by Jessica Wahl at 9:42 AM