I apologize again for the big delay between entries. Having to fix about 98% of the blog and just being too tired to do it every single day...yeah, it takes some time. But, I am back and ready to get some writing done! 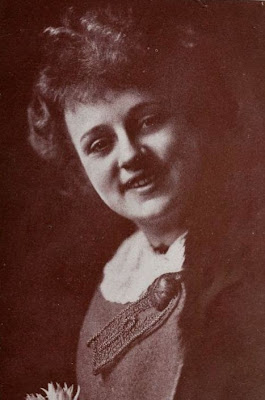 Vedah Bertram was born Adele Buck on December 4, 1891 in Boston, Massachusetts. Her father, Jerome was a very prominent writer and editor and her mother's name was Jennie. She also had an older brother, Edward.

In 1900 her parents divorced and Jennie took her two children to go live with her parents in New York. I believe Jennie died soon after they moved and eventually Jerome Sr. remarried (I think his new wife's name was Catherine). So, for the most part, Vedah kinda grew up alone.

During her school days at Wellesley, she became set on seeking a career on stage which her family was dead set against. She was a society girl getting an education and was not going to lower herself by becoming an actress.

One day, Western movie star Broncho Billy Anderson saw her picture in the society column and got a hold of her to ask whether or not she would like to appear in a film serial he was going to be starring in. Well, he didn't have to tell her twice! She was ready to go!

Unfortunately, her family was still adamant that their daughter would not be an actress. She went to New York anyway against her parents wishes, but she chose the stage name 'Vedah Bertram' so that her family wouldn't be faced with 'scandal' at home.

Her film debut was in 1912's The Ranch Girl's Mistake. She made around 24 films in the year 1912 and all of them were with Broncho Billy, whether he wrote it, directed it, or starred in it, he was involved.

She became very popular in the Broncho Billy serials and could hold her own on screen. She was already a bit of an outdoorsy girl so she could get rough and tumble with the best of them.

Sadly, her last film was to be released the same year that she made her film debut. 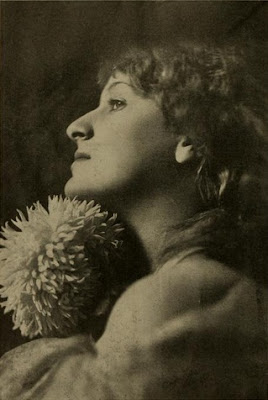 Vedah Bertram passed away on August 26, 1912 in Oakland, California. She had been rushed to the hospital with stomach pains and eventually had to undergo surgery for appendicitis. She passed away shortly after the surgery. Her body was taken back to New York for burial.

Apparently right before she was taken into surgery, she told the doctors and nurses her real name and that her family did not approve of her becoming an actress so she had to make up a name and keep her career a secret. She told them to only tell her family if she passed away.

The news of her death was shocking enough for Vedah's family, but they were completely shocked to learn that their loved one was also a popular screen star who was being mourned by thousands of fans. Under her stage name, they had no idea she was actually working and succeeding as an actress.

And of course there has to be some sort of mystery when it comes to a movie star's sudden and premature death. Adds drama and romanticism I suppose. Anyway, in April of 1912, Vedah apparently injured herself while horseback riding. She recovered from her injuries and continued making movies until she was hospitalized in July with stomach pains and the following month, she dies. Reportedly there was no mention of appendicitis on her death certificate and others make claims that back during the early 1900s appendicitis was a nicer term to use than 'abortion' on a death certificate. I think this could be spun a million different ways and in truth, we will probably never know. 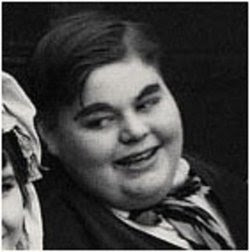 Dee Lampton was born October 6, 1898 in Fort Worth, Texas. He was the eldest child born to William, a grocer, and Minnie Lampton and was joined later by sister Thelma and brother, William Jr.

Growing up, he loved going to the local picture show, which was right next to his father's grocery store, and watch some of the actors on the screen that he would soon be working alongside.

He made his film debut in the 1915 short, Fun at a Ball Game. This short also featured Snub Pollard. Dee soon became a regular in Hal Roach comedies and was pretty recognizable on screen due to his weight of roughly 300 pounds.

Being part of the Hal Roach and Keystone 'families' meant he was able to star with some pretty big names like Harold Lloyd (beginning in the Lonesome Luke shorts), Bebe Daniels, and Mildred Davis. In a span of five years he appeared in almost 60 films.

In 1916, Dee signed a contract with Hal Roach that would guarantee him about twice as much money as Harold Lloyd was being paid at the time. Roach saw a new Roscoe Arbuckle in his midst it seems. Apparently his mother worked as his manager, but both parents helped Dee make career decisions since he was still young.

During 1917 he appeared in a serial as the main character, Schemer Skinny. Would be interesting to see what these shorts consisted of considering that he seems to be the only actor/character in them.

His last film, Haunted Spooks was released posthumously. It was during filming that Harold Lloyd lost two of his fingers when what was thought was a prop bomb exploded in his hand. Production had to be halted while he recovered from losing his fingers, burns on his face, and injury to his eyes.

Dee Lampton passed away on September 2, 1919 in New York City from appendicitis. Doctors found that his heart was weak from supporting his tremendous weight already and they figured that surgery to remove his appendix would kill him. Unfortunately, not doing anything for his illness also ended up killing him. He was only 20 years old.

He was buried in the Mount Olivet Cemetery in Fort Worth, Texas.

"Everyone in Los Angeles was crazy about him. He was an especial favorite with film folks." ~~ Eunice Grimes, Dee's cousin, to the Fort Worth Star-Telegram on September 4, 1919

"I can also remember Dee because of that wonderful smile of his. He never entered my house without a smile. I had known him since he was a little tot running around his mother's knee." ~~ Rev. Hall at the funeral of Dee Lampton
Posted by Jessica Wahl at 1:16 PM 8 comments:


Man, I always seem to be writing about being sorry for not updating for weeks on end. But, some of the picture links have died again so I am having to fix them and it is taking forever. I will say I about 3/4 done, so it will not be long until I am churning out new entries on stars. I promise I have not abandoned you!

Dee Lampton and Vedah Bertram are next!


Posted by Jessica Wahl at 7:51 PM No comments: