For me, I tend to put Pola Negri in the same category as Alla Nazimova. To me, they are the exotic, out there, over the top divas of the silent screen. Which, don't get me wrong, is not a bad thing, its just how I picture these ladies. I read Pola's autobiography a few years back and she certainly painted an interesting picture. What is true and what is just from Pola's own imagination has been somewhat strained between fact and fiction. But, her outlandishness just makes her absolutely fabulous! Another lady that belongs in the silent era. 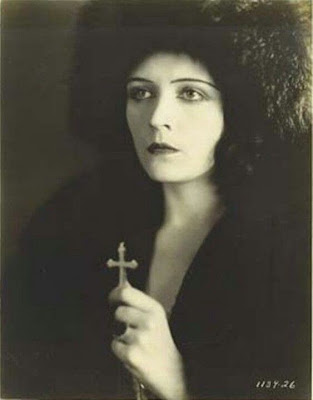 Pola Negri was born Barbara Apolonia Chalupiec on January 3, 1897 in Lipno, Poland. Her mother ended up having to raise her daughter on her own, after her husband was arrested by the Russian police and sent to Siberia. They lived in poverty throughout her childhood and eventually moved to Warsaw. Here, Pola took dancing lessons, but had to stop when she was stricken with tuberculosis.


She soon became a popular stage actress in her native country. She made her film debut in 1914. Soon after, she began using the stage name of Pola Negri.


In 1917, she moved to Berlin to continue her acting career. Soon after, in 1922, she was invited to go to Hollywood to sign a film contract. 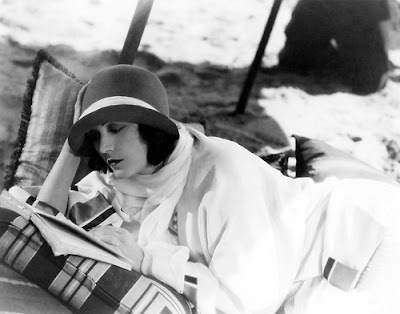 
Not all of the interest in Pola was in her screen work. People also began to read about her off screen romances. Her most famous beaus were Charlie Chaplin, who she was briefly engaged to, and Rudolph Valentino. Although, the relationship with Valentino really came to life after Rudy died. Pola was seen at his funeral swooning repeatedly, spelled out her name in flowers on his coffin, and telling anyone who would listen that she and Valentino were engaged to be married. She said he was the love of her life and kept his picture by her bed. Many of Valentino's friends deny that the two were engaged and that she was using all of this for publicity purposes. But friends of hers, fellow actresses (like Mary Pickford), and even Valentino's brother Albert defended Pola. (Personally...I don't know whether or not they were engaged...but did Pola milk the publicity? Yeah, just a little bit). 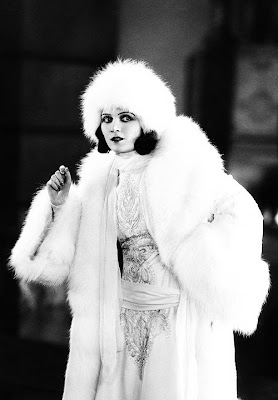 Pola managed to get two men to the altar. She first married Count Eugene Dambski in 1921 and divorced him a year later. She then married Serge Mdivani in 1927. He claimed to be a Georgian prince, but who knows. His brother, David was married to Mae Murray for a time. Pola and Mdivani lost their money in the stock market crash, and then divorced in 1931. She never had children.


Because of her heavy Polish accent, she was not successful in the talkies. During this time, a rumor circulated that Pola was having an affair with Adolf Hitler. This started after Hitler reported called her his favorite actress. She went to Poland to help with the war effort. After the Nazi party stated that Pola had Jewish ancestry, she fled Poland and Germany and went to France.


Pola was one of the actresses who was approached by Billy Wilder to play the role of Norma Desmond in Sunset Blvd. She apparently threw a fit and scoffed at the idea of being cast as a has-been.


Moon-Spinners in 1964 was her final film role. She still maintained her diva like behavior after she quit the movies, ironically, mimicking the role of Norma Desmond, the role she turned down.

Pola Negri died on August 1, 1987 on pneumonia. She also apparently was suffering from a brain tumor, which she had failed to treat. She was interred in Calvary Cemetery in Los Angeles.


It was rumored that Pola had affairs with Mercedes de Acosta and Milton Berle. Mercedes claimed this in her autobiography, but there is no other proof than this. Berle made these claims of various radio shows, but then added that the women were dead, so they couldn't disagree.

And, is it just me...or does Pola have a lot of face going on?

"I consider my work great, as I am a great artist." ~ Pola Negri
Posted by Jessica Wahl at 5:46 PM