Now, for the one who started it all for me...Louise Brooks. I had seen bits and pieces of silent films, mostly on TCM and the like. But, the first silent film I actually got myself and sat down and watched the whole way through was Diary of a Lost Girl starring Louise. I don't know why I chose that film. Maybe it was just the first one I saw on the shelf at work...who knows. Anyways, I had recognized her from pictures I had seen, ones highlighting her famous hairdo.

Last December, when my best friend and I visited our friend in Rochester, New York, I had the chance to visit Louise's grave. It was amazing that such a star had such a modest grave. It was great to visit her though.

Louise Brooks was born Mary Louise Brooks on November 14, 1906 in Cherryvale, Kansas. Her father Leonard was a lawyer and her mother Myra was a pianist. Their philosophy was that the kids could take care of themselves.

Sadly, when she was nine years old, Louise was sexually abused by a neighbor. This stayed with her throughout her entire life, and stated it as the cause to why she was incapable of real love. She told her mother about what happened later on, and her mother basically said that it was her fault for "leading him on." (Nice, eh?)


Louise began dancing at a young age, eventually making her way into the Denishawn Dancers. She did not get along with fellow member Ruth St. Denis, who eventually fired her. She didn't have to wait long for another job though. She began dancing in George White's Scandals and then was featured dancer in the 1925 Ziegfeld Follies.


Like many of the Ziegfeld Girls, she was approached to appear in films. She signed a contract with Paramount Pictures in 1925. She made her first screen appearance that same year.

Louise began appearing in comedy films, and usually as a flapper. She began to be noticed by fans and filmmakers alike. Fans copied her black bobbed hairdo, which is what many people know her by today.


She was a friend of Marion Davies' niece, so she spent a lot of time at the William Randolph Hearst mansion. This was usually as far as she went hobnobbing with celebrities because she didn't really like the whole Hollywood scene.


In 1929, Louise went to Europe to make films for G.W. Pabst. Their first film together was Pandora's Box. It was very modern for that time period, showing very loose sexual morals and was perhaps the first film to show a portrayal of lesbians. Next was Diary of a Lost Girl, which was also controversial. The third teaming of Pabst and Brooks was Prix de Beaute.

Louise returned to Hollywood in 1931 and made two films, but nothing came about from them. She was offered a role in the film Public Enemy alongside James Cagney, but she turned it down. She claimed she was tired of Hollywood and making movies. The role was given to Jean Harlow, and it helped launch her career.


Louise did appear in a short directed by Roscoe Arbuckle, who had just been outcast from Hollywood after the Virginia Rappe scandal.


She made her last film in 1931 alongside John Wayne. After that, she went from Kansas to New York doing various jobs. She worked as a salesgirl at Saks Fifth Avenue and as a courtesan for wealthy men. There has been suggestion that due to her addiction to alcohol, that she worked as a prostitute...but I don't think so.
In the 1950s, silent films began to be rediscovered. Louise began attending film festivals and eventually moved to Rochester, New York to be closer to the George Eastman House, which housed many film collections. She rarely gave interviews, but did publish her own book in 1982. She did like to talk to film historians though, giving amusing anecdotes about Hollywood history. 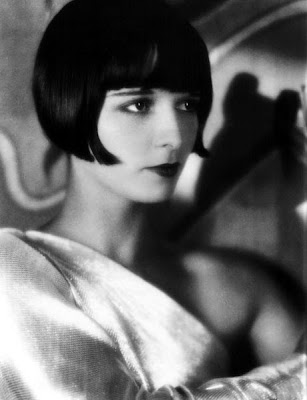 Louise Brooks died on August 8, 1985 of a heart attack. She was interred at the Sepulchre Cemetery in Rochester, New York.


She may have never really loved a man, but she was married twice. The first time was in 1926 to director Eddie Sutherland. They divorced two years later after Sutherland realized that Louise was romantically involved with George Preston Marshall, the future owner of the Washington Redskins. This relationship didn't seem to last long because in 1933 she married again, this time to millionaire Deering Davis. She left him after only 5 months but they didn't divorce until 1938. 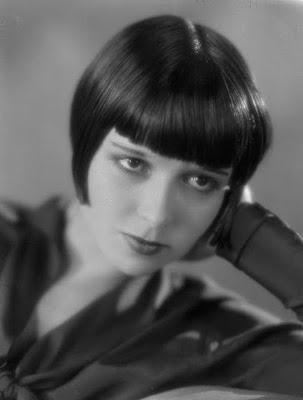 There are also the lesbian rumors, which Louise loved to help fuel. She did admit to a one night stand with Greta Garbo though (Umm...I'm not into chicks, and I'm sorry but, I would have been intrigued enough to have watched that...just saying)


When she was younger, her best friend was Vivian Vance.


She dated Charlie Chaplin after he saw her in the Ziegfeld Follies.

"When I went to Hollywood in 1927, the girls were wearing lumpy sweaters and skirts. I was wearing sleek suits and half naked beaded gowns and piles and piles of fur." ~ Louise Brooks

This is a great clip of Louise talking about Pabst and her co-star in Pandora's Box. She is so lively and talks like a young girl, I just love it! She was so full of life. Another great reason to just adore Louise.