I love reading movie magazines from the silent era. I read gossip magazines now, but I don't give a damn about most of the people profiled. But, reading gossip about silent film stars? Oh, I am there!

I was digging through some Photoplay magazines from the 1920's and wanted to share some of the tidbits I found from their gossip column. 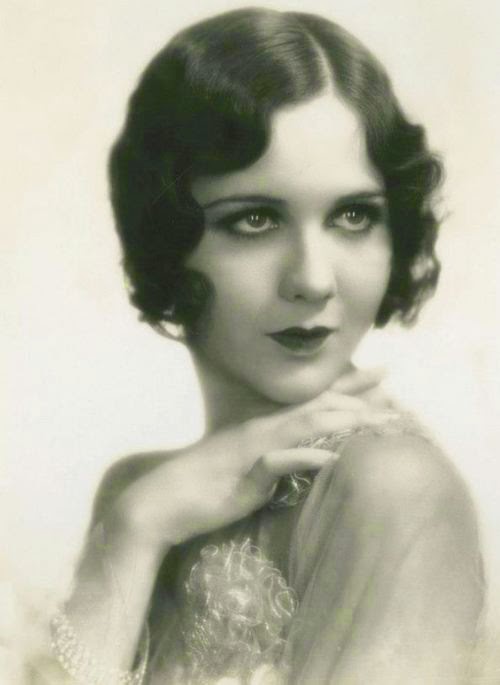 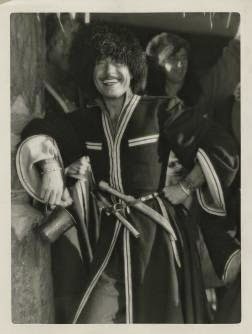 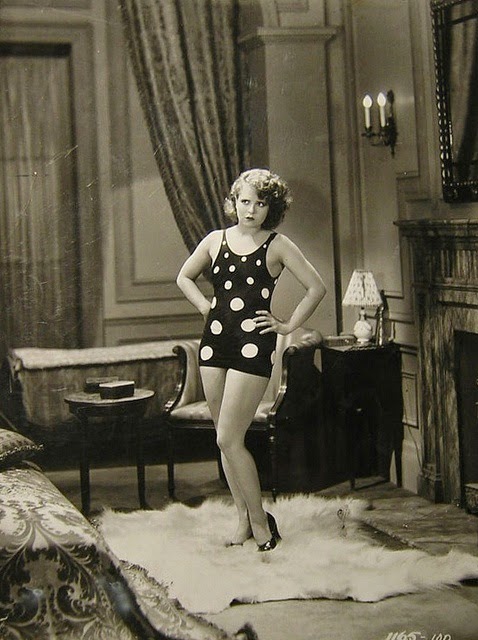 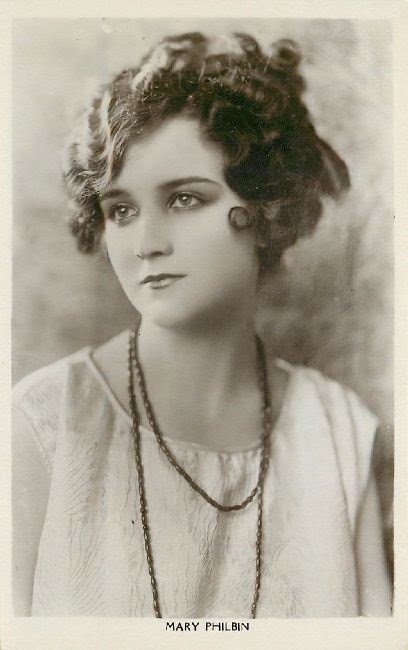 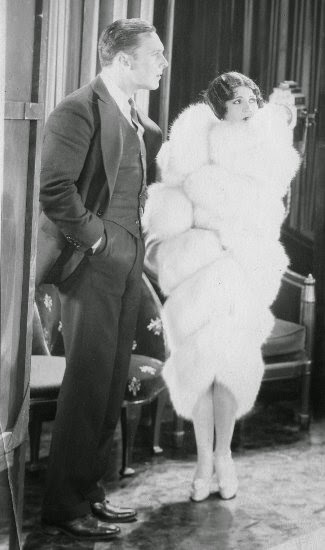 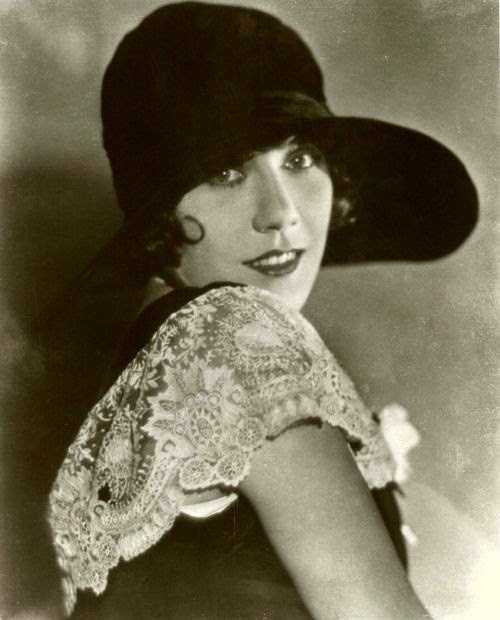 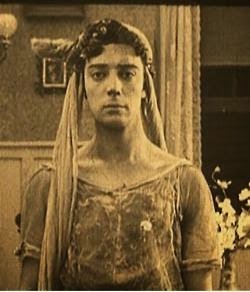 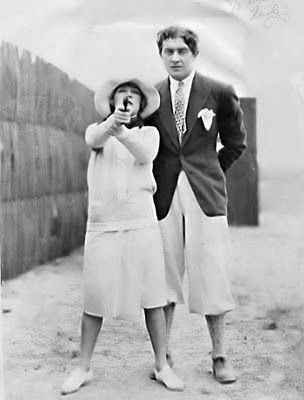 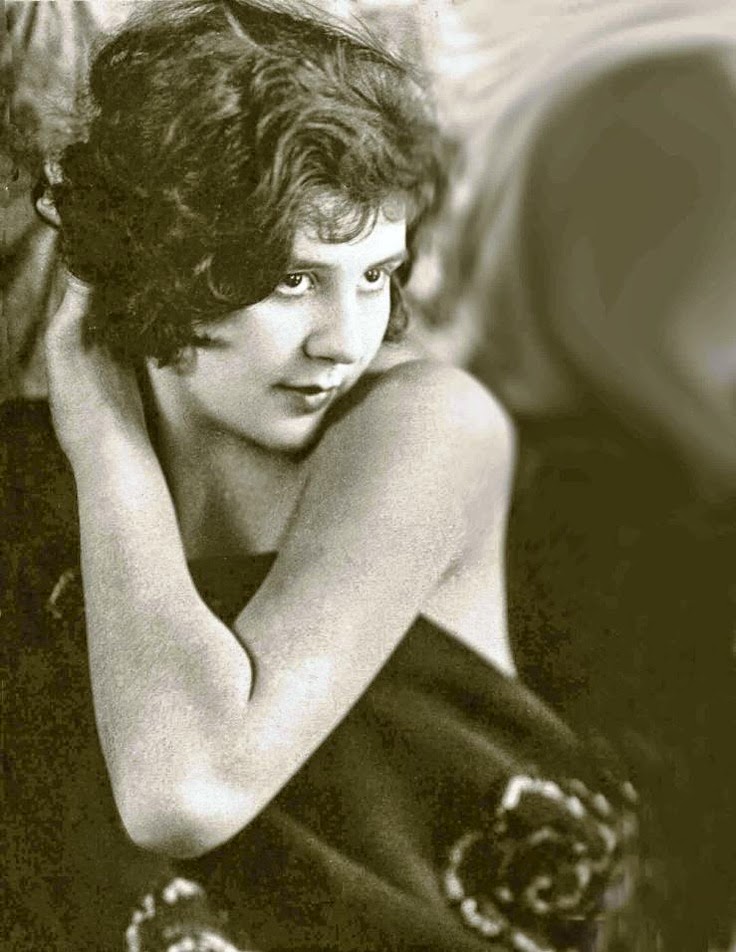 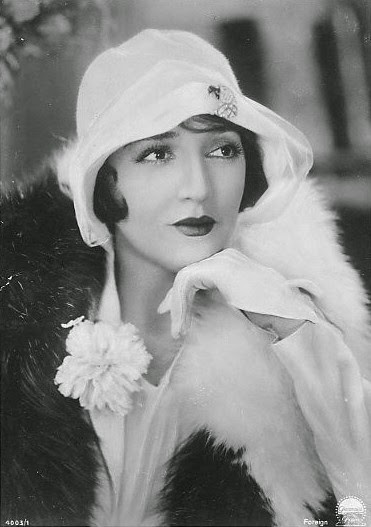 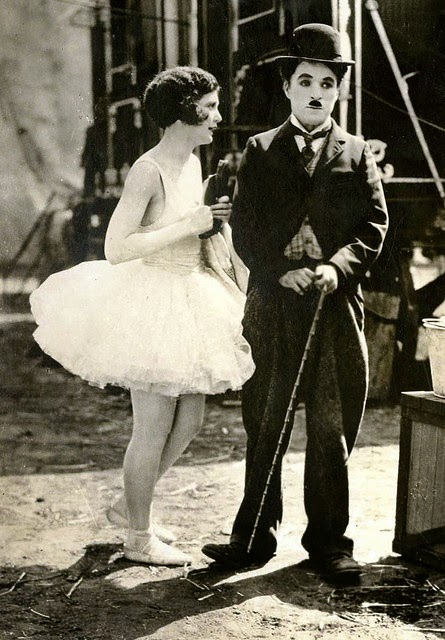 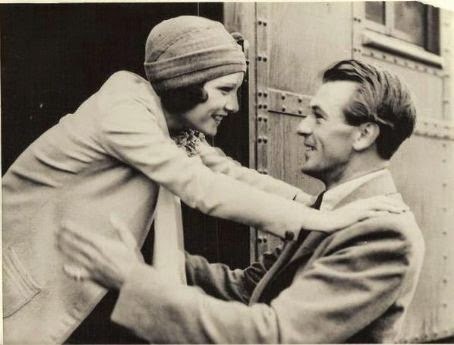 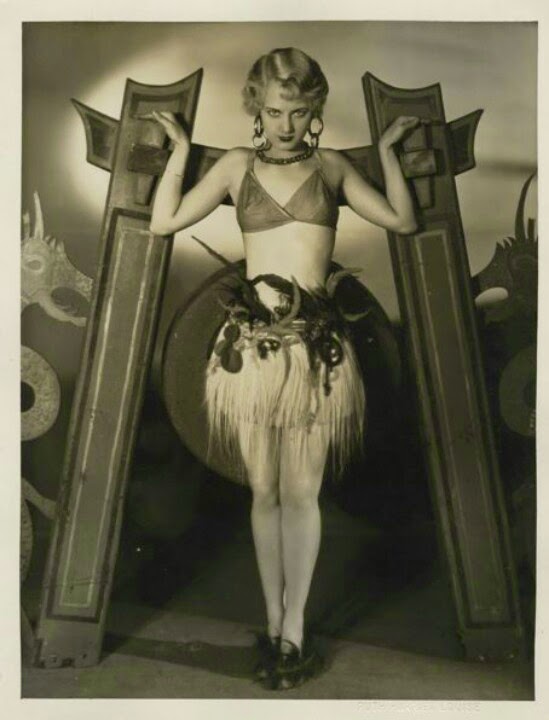 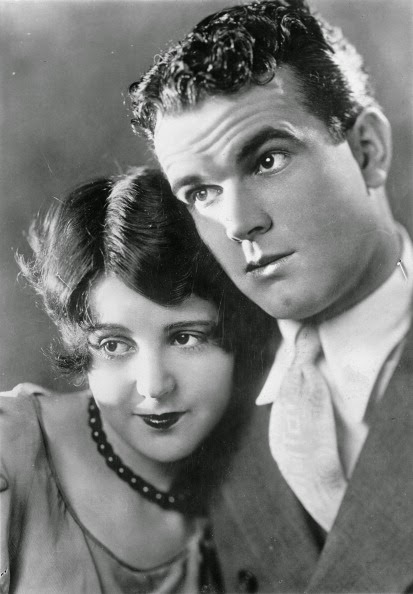 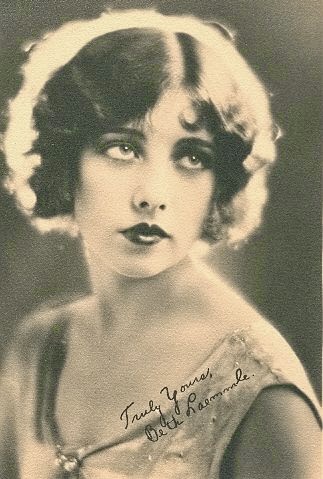 As many of you know, last week we lost one of the few remaining links we have to the silent film era. Carla Laemmle passed away at the age of 104 years old. She was a beautiful young lady who shared wonderful stories about her time in Hollywood and rubbing elbows with such big names as Bela Lugosi and Lon Chaney. One of my favorite stories is when she talked about seeing Bela with scratch marks and when asked what they were from, he just went "Clara! Clara!" (as in Bow!) I love reading/hearing stuff like this.

Carla may not have had a huge career in Hollywood but she deserves to be remembered as a beautiful link to a beautiful era. 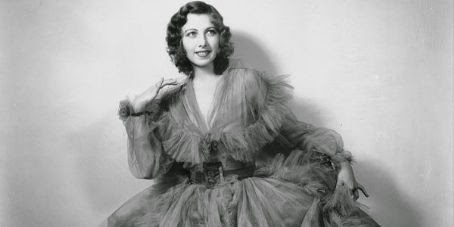 She was the only child born to Joseph and Carrie Laemmle. Joseph, who worked in real estate, was the older brother of Carl Laemmle, founder of Universal Studios. Joseph was married previously and had a son, Edward, who was 22 years old when his half sister was born. Edward eventually became a film director.

Joseph received a postcard from his brother, Carl inviting him and his family out to California. The family eventually settled near the Universal Studios back lot which gave young Carla a chance to see various films being made, including The Hunchback of Notre Dame starring Lon Chaney.

Carla made her film debut as a ballerina in Lon Chaney's The Phantom of the Opera. Mary Philbin, the leading lady of the film would become one of Carla's closest friends. 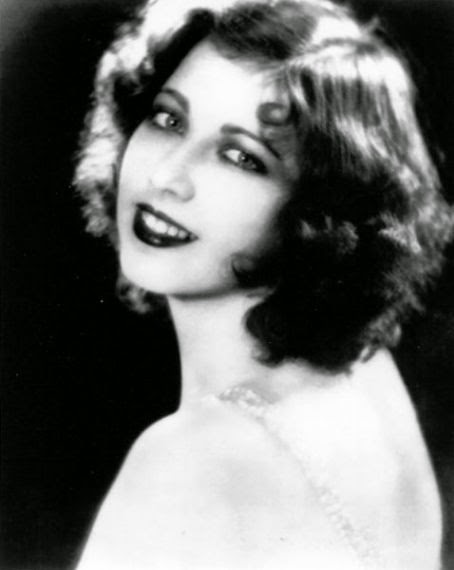 Even though Carla didn't become a huge star she did appear in some of the most well known pictures during the silent era. In 1927, she appeared in TWO versions of Uncle Tom's Cabin. The first was with Vivian and Rosetta Duncan in Topsy and Eva and after was the version starring Margarita Fischer. Two years later she appeared as a dancer in the smash hit talkie, Broadway Melody with Bessie Love and Anita Page. (I love that movie!)

The film that she is probably the best known for is 1929's Dracula starring Bela Lugosi. Carla appeared as a coach passenger who uttered the first lines of the film.

In 1939, Carla decided to take a hiatus from the screen and what a hiatus it was! She didn't appear in another film again until 2001! She was acting all the way up until this year in low budget horror films, a few of which featured Tyrone Power Jr. (who is really Tyrone Power IV) 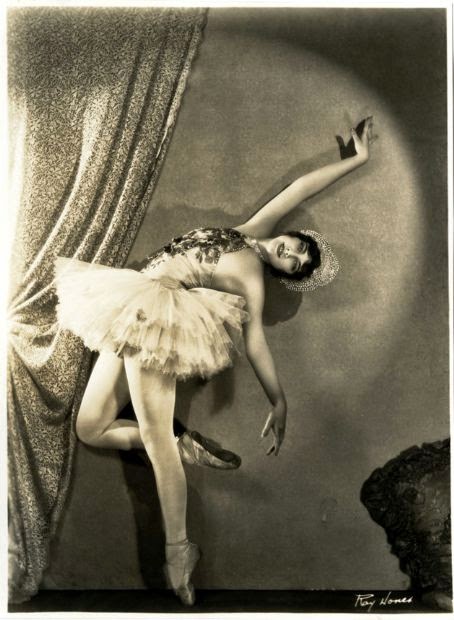 She was buried at the Home of Peace Memorial Park in Los Angeles along with her uncle Carl, aunt Recha, and cousin Carl Jr.

Carla never married, but she did have a long term relationship with actor Ray Cannon.

Early during her career she used the stage name 'Beth Laemmle.' 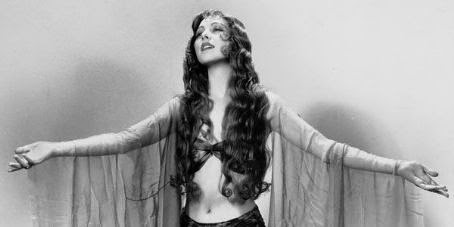 "I had the privilege of speaking the first lines of dialogue in the first talking supernatural thriller!" ~~ Carla Laemmle 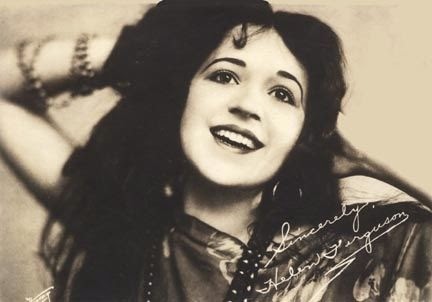 I love this picture. I had to double check the first time I saw it to make sure that it actually was of her and from that period because it looks like a picture you would see of a girl today. She is so beautiful and vibrant looking, it just makes for a lovely portrait of her. I think she was absolutely adorable and while reading about her, I found out that she was also a lovely lady on the inside...with a hint of scandal. 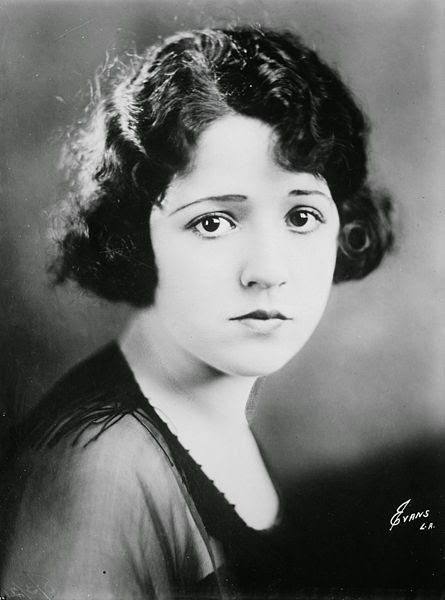 Helen Ferguson was born on July 23, 1900 in Decatur, Illinois. (I have seen her birth year range from 1892 until 1902) She was the eldest daughter of Fred, who worked in retail, and Emilie. Her sister, Catherine was born three years later. Fred and Emilie would later divorce.

She received a great education at an school of fine arts in Chicago and would later use what she learned there to work briefly as a stenographer and a newspaper reporter. 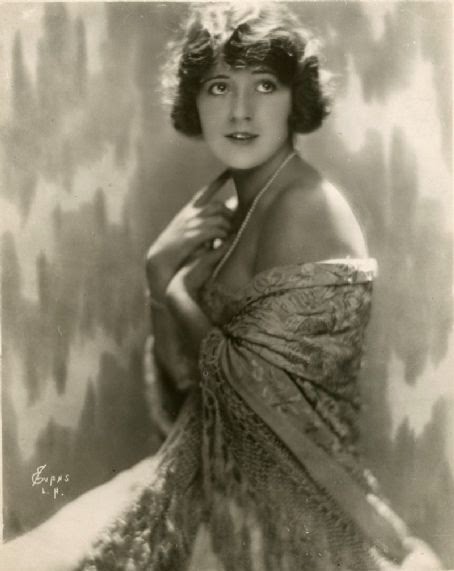 There was a bit of confusion as to when Helen really began acting in films but I believe I have it narrowed down. She began doing stunt work in films around the age of 12 or 13, but was not credited in her work.

Her first film would be 1917's Max Wants a Divorce. 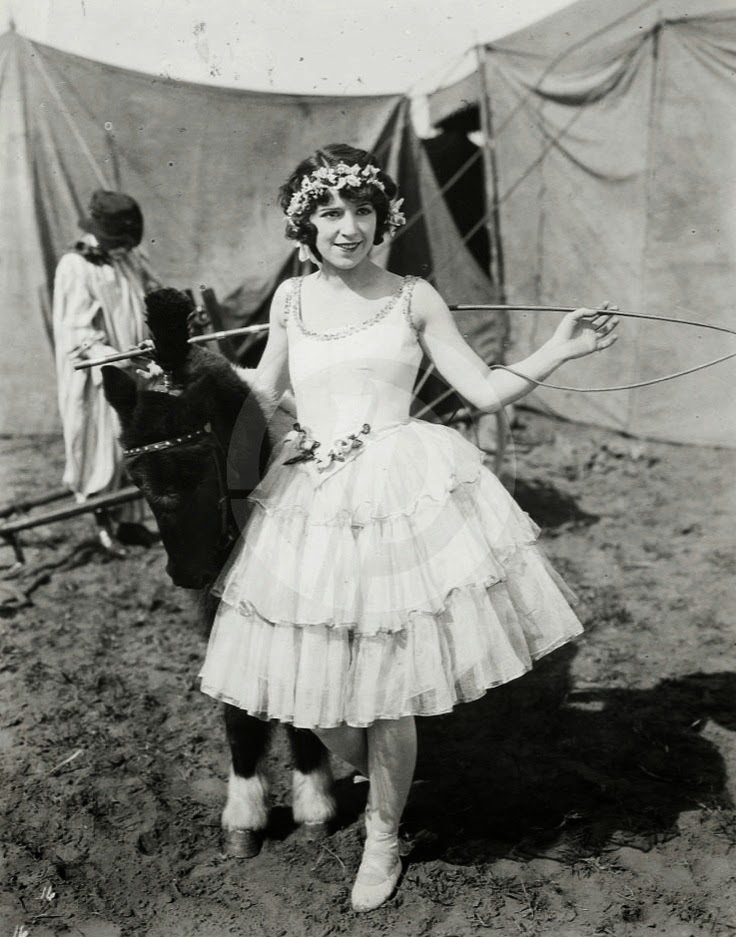 Helen would continue appearing in action flicks and westerns so she could keep showing off her daring stunt work. Two of her frequent western costars were cowboy actors Hoot Gibson and Buck Jones. It was while working with the latter that she really gained movie audience's attention.

In 1922, the WAMPAS Baby Stars ran it's first campaign and Helen was one of the ladies chosen that year along with Lila Lee, Bessie Love, and Colleen Moore. Not bad! 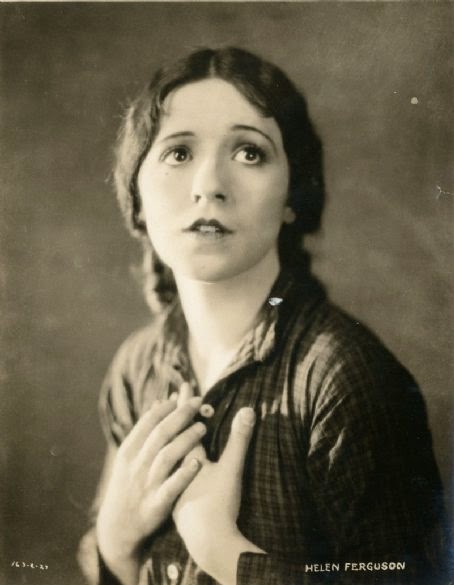 She did make a few talkies, but since she wasn't a huge star in the silents her popularity just plateaued. Her last film appearance was in an uncredited role 1934's Kid Millions starring Eddie Cantor.

Helen was just tired of acting in films and also wanted to concentrate on her personal life. She went back to her first love, the stage but found little success there. After that, she decided to go to work behind the scenes, working as a publicity agent for such big names as Loretta Young, Robert Taylor, Jeanette MacDonald, Barbara Stanwyck, and Pat O'Brien. This is where she really found her niche. She was famous for being very crafty at keeping newspaper reporters from nagging at her clients. Helen Ferguson passed away on March 14, 1977 in Clearwater, Florida.

She was buried at Forest Lawn-Glendale in California.


Helen was married twice. Her first husband was the actor William Russell. The two met on the set and dated for about six years before finally tying the knot in 1925. Sadly, four years later, William Russell died of pneumonia. Helen was devastated, telling reporters that she didn't see the point in doing anything anymore.

BUT, she bucked up eventually and went on to marry a banker named Richard Hargreaves, the man who helped her settle her first husband's estate. Apparently, Russell told Helen that she should marry Hargreaves and that he was a good catch. Well, there ya go! The couple remained married until Helen was once again made a widow in 1941. Neither marriage produced children.

So, ready for some salacious gossip? Of course you are! Supposedly Helen had a long term affair with her client and best friend Barbara Stanwyck. The relationship was said to have lasted for over 30 years, even when both were married. Seems like most of the women from that time had a bisexual label added to them.


Helen counted fellow actresses Helene Chadwick, Mildred Davis, Lois Wilson, and May McAvoy among her closest friends. She, along with Mildred Davis, were both bridesmaids at May McAvoy's wedding.

In 1925, she had a nose job to fix a large bump on the bridge of her nose. I never really noticed the change in before and after photos until I saw a picture of her profile in a newspaper and then it was plain as day.

One of the best stories I have heard in awhile concerns Helen and actor Ben Lyon. Helen went to a movie theater in New York with her friend Lois Wilson, who had a role in the film that was showing. Helen was approached by a man with a beard who grabbed her arm and would not let go. She thought it was an overzealous fan, so when he wouldn't let go, she socked him right in the jaw! It was after the man was knocked to the ground that he finally told her his identity. It was Ben Lyon, her friend and fellow actor! Ben had recently grown a beard for an upcoming movie and apparently his whiskers were one heck of a disguise. Helen of course apologized to him but said he was the one to blame! 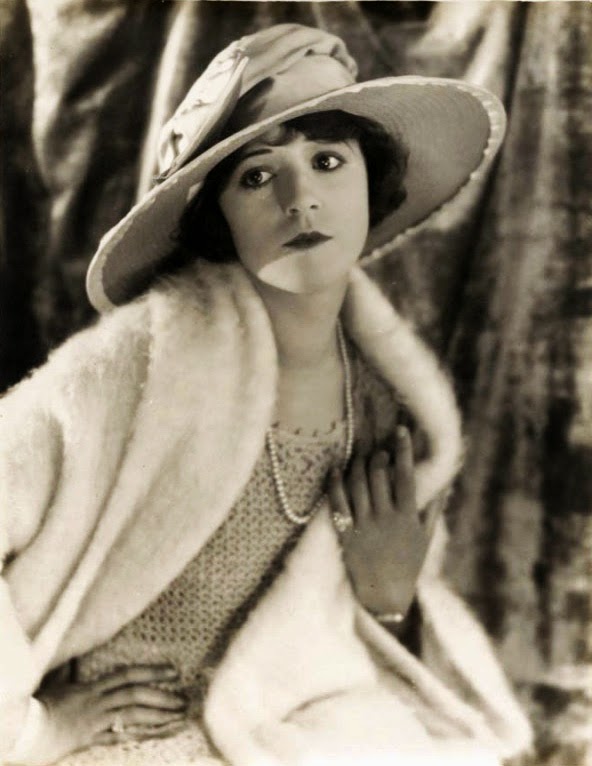 Helen considered being late to set one of the worst things an actor could do. She would consider it a huge embarrassment to keep a director waiting on set. You hear that, Lindsay Lohan?

"The only reason I wanted to get into movies was to be able to buy my mother a brass bed. I'll bet no other actress can make that claim." ~~ Helen Ferguson - Miami News - September 8, 1973

[to a Picture Play contest winner who won the chance to spend a day with the actress] "To Ethel Sands - who knows me 'as is,' without make-up 'n' pretense - just Helen Ferguson." ~~ Helen Ferguson - January 1923
Posted by Jessica Wahl at 2:30 PM 6 comments: