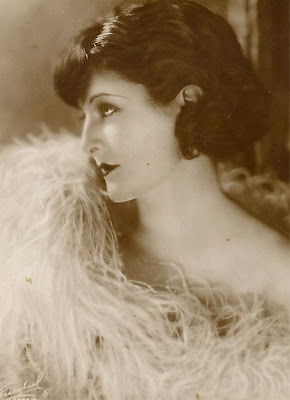 I came across Lya De Putti in pictures. She really was a beautiful lady, and I loved her short hair cut! She was famous for playing vamp roles, but didn't reach stardom in Hollywood. Her early death put an end to any chance she had of rising higher in the ranks.


Also...the fact that her death was caused by a chicken bone reminds me of Beetlejuice when they are in the waiting room and they see the guy with the bone stuck in his throat. Sad, but true.

Lya De Putti was born Amalia de Putti on January 10, 1899 in Vecse, Hungary. Her father Julius was a cavalry officer, and her mother was the former Countess Maria Katarina. She had two brothers, Geza and Alexander. And a sister, Mitzi.


She began appearing in the vaudeville circuit in Hungary before traveling to Germany.


She married her film debut in 1918, but her breakthrough film didn't come until 1925 when she was cast in The Mistress of the World.

Lya came to America in 1926. She appeared in D.W. Griffith's The Sorrows of Satan. In the European release of the film, there included a scene where Lya was topless. She was fully clothed in the American release.


Her thick accent made it hard for her to break into talkies, so she left Hollywood in 1929 to appear on stage, but that venture failed. She did make a few more silent films over in Europe at this time as well.


A few years later, she was hospitalized to have a chicken bone removed from her throat. There, she contracted an infection, then pleurisy on her ride side, and then pneumonia in both of her lungs. She was trying to recover in the Harbor Sanitarium.

Lya De Putti passed away on November 27, 1931 of lobar pneumonia in New York City, New York. She was only 32 years old.


She was interred at the Ferncliff Cemetery in Hartsdale, New York.


Lya was married twice...which isn't bad considering the image she portrayed on screen. She first married a county magistrate named Zoltan Szepessy in 1913. They had two daughters together, Ilona and and Judith. They divorced in 1918. Her second marriage was to Louis Jahnke in 1922 and they stayed married until her death.

I absolutely love this picture! How badass does she look in that shirt?! Love it!!

This is a quite a little film snippet! European films have always been a little more...risque' than the ones here in the States. And Lya's scene is an example of that. Wowza!