A sister act! These ladies were both suggestions from a reader and I was able to dig up some interesting stuff about them in their later years. Mary's story especially is a reminder of what happens to many film stars that fade from the spotlight and just become lost.


Katherine Agnew MacDonald was born on December 14, 1891 in Pittsburgh, Pennsylvania. Mary MacLaren, born Mary MacDonald, was born on January 19, 1896. Katherine was the eldest daughter of William and Lillian MacDonald, followed by sister, Marian, and then youngest sister, Mary. Their parents divorced sometime during the 1900s because Lillian is listed as such in a 1910 census record. (According to another census record from the 1920s, while the sisters were working as actresses, they shared a home with their mother and sister, Marian, who didn't have a career listed).

The girls grew up with their mother in Pennsylvania and also spent a lot of time working as models in New York.

Katherine moved to Los Angeles in 1917 and made her film debut the next year in The Spirit of '17, which was directed by William Desmond Taylor. Surprisingly, a print of this film still exists in archives.


Katherine's career took off quick! In 1919, she formed her own production company called (appropriately) Katherine MacDonald Pictures and it was here she became one of the highest paid stars. She wasn't seen as a great actress, but hey, she paid her own bills, so who the hell cares? People did think she was beautiful though, and the public nicknamed her the "American Beauty."

One of her most well known films that she was in was 1918's The Squaw Man. I remember hearing/seeing a lot about this film when I visited the Lasky-DeMille Barn in California. The film is an important one because it was the first film to be produced in Hollywood and Katherine MacDonald, along with Monte Blue, Noah Beery, and Ann Little were a part of that.


Mary meanwhile had been appearing on stage with Al Jolson starting in 1914. She eventually moved out to Hollywood with her sister and made her first credited film debut in 1916's The Shoes.

Like her sister, Mary was also seen as a beauty on the screen and she was given a slighter edge in the acting category over Katherine. Unlike her sister though, Mary appeared in talkies while her sister did not.

Katherine made her last film appearance in 1926's Old Loves and New with Lewis Stone and Walter Pidgeon. After retiring from films, she spent her days selling cosmetics.

Mary meanwhile kept acting until her final film appearance in the 1941 film, Prairie Pioneers . She didn't want to retire, but she was forced into after getting into a car accident.

So, judging from what I have read and the information I have gathered, it seems like the girls' personal lives were more intriguing than their film careers.

Katherine and Mary were the silent version of Olivia De Havilland and Joan Fontaine. Their dislike of each other became a source of gossip among the public but it was mostly in their later years after Katherine spoke about the current living conditions of her sister (Oh, just wait. We will get to that!).

Around 1919, the rumor mill was buzzing that Katherine was having an affair with a prominent married man. Who was the man? Oh, just the President of the United States himself, Woodrow Wilson. He really did get around! First Florence La Badie, and now Katherine MacDonald? Sorry, JFK! Looks like you weren't the first President to have an eye for movie stars! Anyway, there is no hard proof of an affair but Wilson did say that Katherine was one of his favorite actresses, and I am sure there is more to the story because just saying that can't imply an affair. If that was the case, then I had an affair with Buster Keaton! The rumor is also kind of shaky because 1919 was the year that Wilson had a stroke and, I mean, the man couldn't even take care of himself let alone carry on a secret torrid affair!


Mary appeared in the headlines again in the 1970s and not for any star studded film gala. Oh no. She was being brought to court so that someone could be given conservatorship over her because she was living in squalor. A St. Petersburg Times article from November 17, 1979 states:

"Now 79 and alone, caught in a web of court appearances for health and fire safety violations, she [Mary] spends her days on the porch of a house she no longer owns, dressed in clothes bought in thrift shops, surrounded by dogs, cats, Kentucky Fried Chicken boxes and a buzzing squadron of flies and pigeons drawn by food scraps and animal waste...To Miss MacLaren, the situation she finds herself in is 'just unbelievable."

Mary of course thought it all ridiculous and told another newspaper, "I'm not going to leave my house...I'll sleep here till I die." I should note that this quote was said after a fire broke out in her room and she STILL wanted to stay there. She was finally convinced to move to a different building on the property. Wow.

Katherine MacDonald passed away on June 4, 1956 in Santa Barbara, California. She was buried at the Santa Barbara Cemetery.

Mary MacLaren passed away on November 9, 1985 in Hollywood, California. She was buried at Forest Lawn in Glendale.

When it comes to marriages, the sisters had five between them. Mary's first husband was Colonel George Herbert Young and they were married from 1924 until 1928. She married again to a man named Robert Coleman but I am not sure when they were wed or when they divorced. Neither marriage produced children.

Katherine's first husband was K. Malcolm Struss, an artist she met during her years working as a model in New York. They marriage in 1910 but they were soon living apart. The couple officially divorced in 1919. Her second marriage was to a young playboy named Charles Johnston in 1924. And although they had son together named Britt, they divorced in 1926.

Her third and final marriage was to Christian Holmes, one of the heirs to the Fleischmann's yeast company. The couple married in 1928, but divorced three years later after one big divorce trial that cast them both in the spotlight. In the divorce proceedings, Katherine charged that Holmes would burn her with cigarettes, lock her in a cage, and shoot at her! Holmes fired back saying that this was all because she was having affairs and it was embarrassing him. Get this, two years later in 1933, the couple reconciled! Anyway, the marriage did produce a daughter named Ann around 1929.

The car accident that stopped Mary's film career was the second she had to face. The first accident was in 1917 and she was near death for almost two weeks until she had surgery on her skull that saved her life.

In 1983 at a memorial service for Rudolph Valentino, Mary revealed that because of her mother's intrusion, she did not have a romantic relationship with Rudy. Apparently her dressing room was next to his and one night he asked her to go dancing with him in downtown Los Angeles. Her mother forbade her to go, and that was the end of that!

Mary also later told a newspaper that she adored Douglas Fairbanks, but not in the romantic sense.

"Whenever I read a review of one of my pictures that roasts me unmercifully, I think of how many worse things I could have said about the same picture. Often, I am not only in entire agreement with the reviewers, but I think they haven't gone far enough. They say I am beautiful, but dumb. That is almost a formula now for reviewing my pictures; it is so much easier to say that than to think up anything new." ~~ Katherine MacDonald, Picture-Play Magazine - April 1923
Posted by Jessica Wahl at 10:37 PM 11 comments:

I had a reader suggest that I do an entry about Vilma Banky, and my first reaction was to post the link to a previous entry that I did on her. But wait! Lo and behold, I am imagining things again! I never have written about her. Well, what better time to start then now! 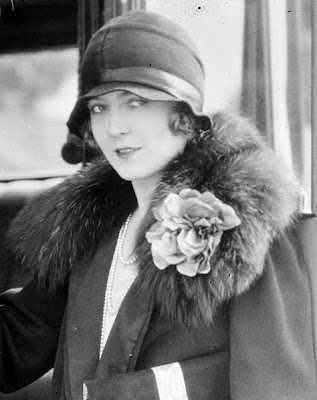 Vilma Banky was born Vilma Koncsics on January 9, 1901 in Nagydorog, Hungary. Her father, Janos, worked as a bureau chief while her mother, Katalin, a former stage actress, was at home raising Vilma, her older brother, Gyula, and eventually younger sister, Gisella.

After graduating, Vilma worked as a stenographer before getting her first movie role in 1919. It wasn't until 1925 though that she headed out to Hollywood. Her parents did NOT want her to go, but go she did and was met with a nice warm reception as only a Hollywood publicity team can do!

Her first American film was The Dark Angel in 1925 with Ronald Colman. She was soon given the nickname "The Hungarian Rhapsody." Why must everyone be given a nickname in Hollywood? What is really annoying to me is that people nowadays are given the nickname the "It Girl" even though the only one deserving of that title is Clara Bow in my opinion. Kim Kardashian? HELLLLLLL no!

Anyway...the next two years she spent starring alongside Rudolph Valentino, which...you know, I wouldn't mind spending two years doing! Their first film together was The Eagle, which also starred Louise Dresser. Their second, and most well known pairing was The Son of the Sheik. Valentino actually chose her to be his leading lady because he liked her so much.

While Vilma made a splash as a sexy, exotic lady of the screen, she didn't have a very long career.  Her last film appearance was in 1933, and it is rumored that her career ended here because her thick accent wasn't right for talking pictures. While that may partly be true, the real reason was because she was growing tired with her film career and wanted to settle down into a normal routine.

After she retired from the screen, she spent her time working in real estate, playing golf, and working for various charities.

Vilma Banky passed away on March 18, 1991 in Los Angeles. Apparently there were no notices of her death until almost a year after the fact, per her wishes. Vilma was mad that no one came to visit her in her final years, so she decided to 'stick it to everyone' by telling her lawyer not to make any mention of her death. Man oh man...

She was cremated and her ashes were scattered at sea.

Vilma was only married once, to actor Rod La Rocque. The two were married from 1927 until his death in 1969. They never had children. From what I have read, their wedding was quite the party in Hollywood.

She was engaged at the time she was offered a Hollywood contract, but her fiance' was opposed to her moving to the states to pursue an acting career. So, bye bye boy!! 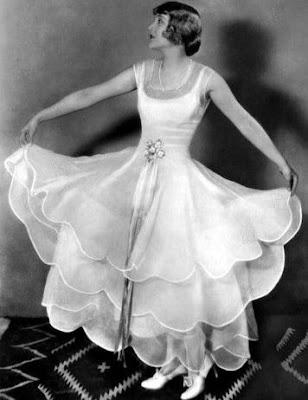 Only eight of films are still around and intact.

Her brother, Gyula, worked as a writer and cinematographer for the German film industry.

When she came over to the U.S., Vilma spoke zero English. So, producer Samuel Goldwyn told her to say, "Lamb chops and pineapple" whenever a reporter asked her a question. Because...why not? Vilma became a U.S. citizen in 1929. 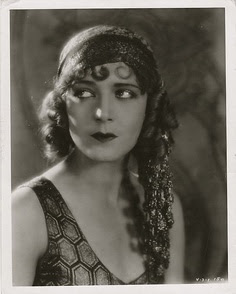 "These sheik is too rough! It is fight, then some more fight all the time. I grabbed this way and that way. I am all the blue and the black; these men they forget. The sheik is never the gentle lover. He grab my two arms. Too much love. I almost am suffocate with the kiss. I do not like that love. But the script say that and so it ees." ~~ Vilma Banky, protesting her love scenes with Rudolph Valentino in the film The Son of the Sheik.
Posted by Jessica Wahl at 5:39 PM 7 comments: