Ooh la la! John Gilbert! It's so sad that he is forgotten by film fans now. He was quite debonair and a sex symbol who rivaled Valentino. I adored him in Flesh and the Devil and in Queen Christina, both with Greta Garbo. In the latter, the talkie, he was great! People lambasted him for his "high pitched" voice, but I didn't notice it. I thought they were both great showcases of his talents.


Like I said before, it's a shame that his career has been stowed away in Hollywood's past. I am sure if people saw him now, they would think he was as great now as he was then. 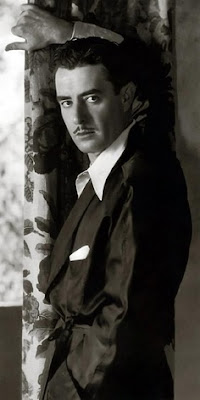 John Gilbert was born John Cecil Pringle on July 10, 1895 in Logan, Utah. John was born into an acting family, but that was about the last thing they had in common because he was often abused and neglected growing up.


He moved to Hollywood as a teenager where he acted in films and also wrote and directed them. In 1921, he signed with Fox studios and began being cast as a romantic leading man. It wasn't until 1924, when he signed with MGM, that he became a star (now sporting his trademark mustache).


Some of his most famous films included: He Who Gets Slapped with Norma Shearer, The Merry Widow with Mae Murray, and The Big Parade with Renee Adoree. The Big Parade was the second highest grossing silent film ever made. It was his role in this film that sent his career soaring even higher (I hope someday soon that The Big Parade is released on DVD!).

His career decline began long before the talkies came around. The cause of his problem stemmed from his frequent arguments with MGM head Louis B. Mayer. The two would often clash on everything from social, creative, and financial matters. The hatred came to a head when Mayer allegedly made a crude remark about Greta Garbo (John's lover) and John attacked Mayer.


John's career could have been saved if Irving Thalberg had lived. The two were good friends and close allies and he would have kept John's career going, but he passed away due to a heart condition at age 37. 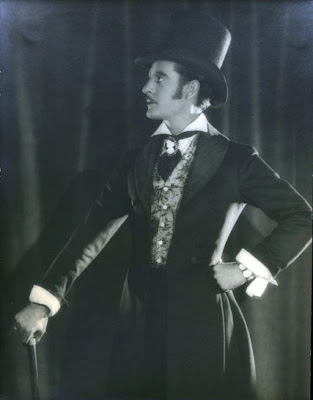 His first talkie appearance was in His Glorious Night, where his voice was actually sounded much higher than it really was (This audio mishap was rumored to have been the work of Louis B. Mayer in retaliation for the beating he took from John). He made a few more films where it was said that audiences laughed at his voice and his over the top love scenes.


He made his last screen appearance in 1934's The Captain Hates the Sea.

John Gilbert passed away on January 9, 1936 at age 40. Years of alcoholism had damaged his health severely, and he eventually died of a heart attack.


He was interred at Forest Lawn in Glendale.


Hollywood's sexy leading man was married four times. First to Olivia Burwell from 1918 to 1922. Next was to actress Leatrice Joy in 1923. The two had one daughter, Leatrice, but eventually divorced in 1925. His third marriage was to another actress, Ina Claire in 1929, but they only stayed married until 1931. His last and final marriage was to yet another actress, Virginia Bruce. They were married from 1932 until 1934 and had one daughter, Susan Ann.


On top of his multiple marriages, he also had affairs with some pretty big stars of the era, most notably, Greta Garbo. The two met during the shooting of their film Flesh and the Devil in 1926. After that, the two began a tumultuous, passionate, and public affair. They were in fact going to get married...twice, but Garbo got cold feet both times and left him standing at the altar.


John also was involved with Marlene Dietrich. They were dating towards the end of his life (Guess he had a thing for foreign dames). 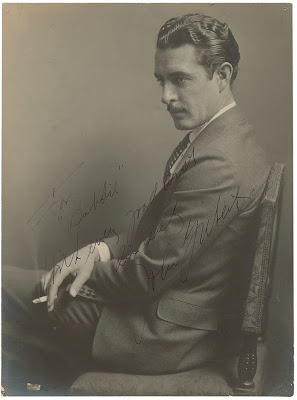