The lovely Anna May Wong. Such a beautiful woman. She also had that look in the eye that made you think that she could probably take you down with one shot. But, that's sexy, so we love it! Just like Josephine Baker, I am using Anna May as the subject of a paper I am writing for my Minority Women in the U.S. class. During the silent era when it was just about the virginal Gish or the flapper Bow, Anna May stood out as the first Asian American movie star. I first saw her in Peter Pan, and she did a wonderful job. (That is a really great movie by the way, full of great stars. Check it out!) 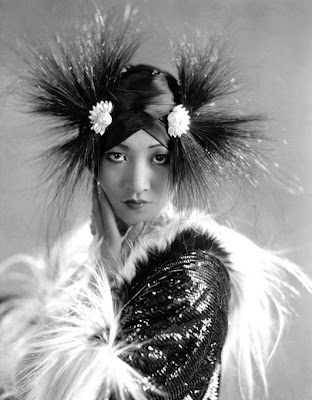 Anna May Wong was born Wong Liu Tsong on January 3, 1905 in Los Angeles, California. She was the second of seven children born to Wong Sam Sing and Lee Gon Toy. She had four brothers: Richard, James, Frank, and Roger. And two sisters: Lulu and Mary. (Her mother died in 1931 after getting hit by a car).

She attended a public school at first, but after she was the target of racial threats, her parents enrolled her in a Presbyterian school where she learned English. She also attended Chinese language school after school and on the weekends. 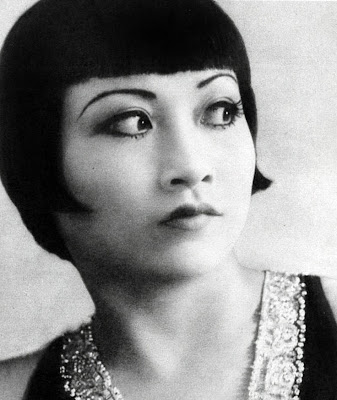 During her childhood she became very interested in the new media of film. Films were being shot around her neighborhood, and she went to the local Nickelodeon to view the newest flicker. She began begging filmmakers for roles in films, earning her the nickname of "C.C.C." (Curious Chinese Child). When she was 11, she chose her stage name Anna May Wong.


Her father was not happy about her choice of career, but it was actually a friend of his that got Anna May her first screen appearance as an extra in 1919. She dropped out of school in 1921 to fully pursue a career in acting.


She kept making appearances in films but studios wouldn't place her in a starring role because of her ethnicity. There was actually a law in affect that prevented actors from kissing if the other was in "yellow face." And since there was only one leading actor at the time who was Asian (Sessue Hayakawa), she couldn't star in a picture. 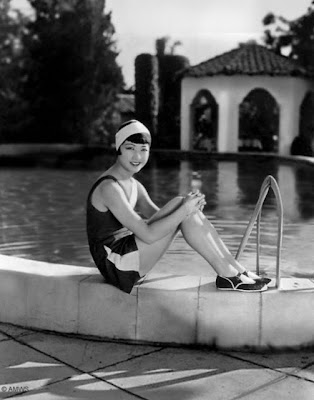 She finally made a big splash by appearing in the 1924 film The Thief of Baghdad with Douglas Fairbanks. She played the role of a stereotypical "Dragon Lady." This was one of the two options that was open for her to play. It was either the deadly, sexy "Dragon Lady" or the innocent, submissive "Lotus Flower."

Anna May began feeling annoyed at the restrictions films were causing her, so she began touring on the vaudeville circuit. The tour didn't go as well as she thought it would, so she had to return to acting in films. 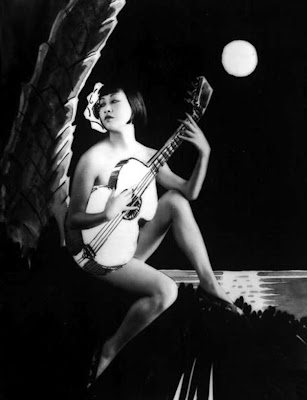 In 1926, Anna May, along with Norma Talmadge, attended the groundbreaking of Grauman's Chinese Theatre. Norma's footprints and autograph were immortalized in cement in front of the theatre after she accidentally stepped in the wet cement. Anna May was never asked to do this, even though she helped place some of the first rivets in the new theatre.


Just like Josephine Baker, Anna May moved to Europe where she found better success. It was here she befriended director Leni Reifenstahl. This close friendship, along with one she had with Marlene Dietrich, led to rumors that Anna May was a lesbian. The two actresses provocative scenes in the film Shanghai Express only fueled the rumors, but the relationship was never confirmed.

In 1930, she returned to Hollywood after having success in both German and English films overseas. When she heard that MGM was looking to do a film based on the book The Good Earth by Pearl S. Buck, she was aching for the female lead of O-lan. The studio couldn't cast her because her leading man would be Paul Muni, an American...who she could not kiss on screen. Also, the Chinese government was strongly against her being cast because they felt she did not represent China in a good light. The role of O-lan was eventually given to Luise Rainer, who won an Academy Award for her role. Anna May was offered a small part in the film, but she refused. Her younger sister Mary Liu Heung Wong did appear in it though. (Sadly, Mary hung herself three years later at age 30).


She appeared in films for years up until she died. They were mostly B-films and ones made for poverty row studios though. She was scheduled to appear in the film Flower Drum Song but had to decline due to failing health. 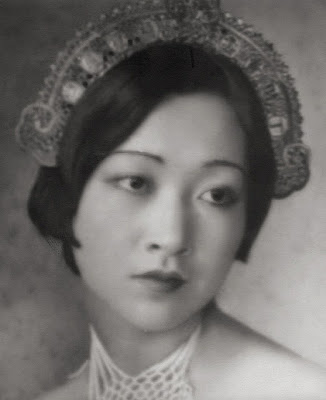 Anna May Wong died on February 2, 1961 of a heart attack in Santa Monica, California. She was interred with her mother at the Rosedale Cemetery in Los Angeles. For years the tombstone only contained the name of her mother, until 2008 when fans raised funds to buy her a proper headstone.

She never married and never had any children.


I absolutely love that she signed her autograph as "Orientally yours."