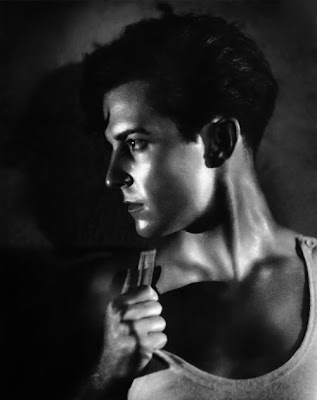 Aww! I just love Ramon Novarro. I saw him in The Student Prince in Old Heidelberg a few years ago, and just melted. He was just so lovely and endearing, how could you not love him?! This charming man did not deserve the horrible end he met with. Murdered by two brothers...I really hate people sometimes I swear...

Ramon Novarro was born Jose Ramon Gil Samaniego on February 6, 1899 in Durango, Mexico to M.N. and Elenor Samaniego. He had three sisters: Carmen, Luz, and Lenore. And four brothers: Mariano, Eduardo, Jose, and Antonio. At around age 14, he moved with his family to Los Angeles to escape the Mexican Revolution. He made his film debut a few years later in 1917.

His most famous film was 1925's Ben-Hur. It was pretty explosive due to the revealing costumes and helped make Ramon a star.


After Rudolph Valentino died in 1926, Ramon became Hollywood's top Latin actor. (There wasn't any conflicts between the two actors, they were actually good friends). (...maybe more? Who knows?!)

In 1935, his contract was up at MGM and the studio decided not to renew it. He continued to act in films and even appeared on a few television shows. Even though he was not acting as much, he still maintained a pretty comfortable lifestyle due to his investments in real estate.


Ramon never married, although Louis B. Mayer once tried to get him interested in a "lavender marriage." Ramon was in fact gay, which caused him inner turmoil because of his conflicting religious beliefs. This also led him to become fond of the bottle. He was linked to a few men. The one who stands out is his own publicist, Herbert Rowe.


On October 30, 1968, Ramon called an escort agency and asked for some...well, male company. His call was answered by two brothers, Paul and Tom Ferguson. The boys (only 22 and 17) thought that there must be money stashed around the house and began torturing Ramon to find out where it was hidden. All they found was $20. Ramon Novarro died of asphyxiation from choking on his own blood. The two assholes were arrested and sentenced to long term prison sentences, but were released soon after. A little while later, they were arrested again for a different crime and were put back in prison...where they remain.

Ramon Novarro was interred at the Calvary Cemetery in Los Angeles.

He was the second cousin of actress Dolores del Rio.


He got his stage last name of Novarro from his good friend Gabriel Navarro. A typo made by a secretary changed the spelling from "A" to "O." Gabriel Navarro is the grandfather of Dave Navarro. (Pretty cool, eh?) 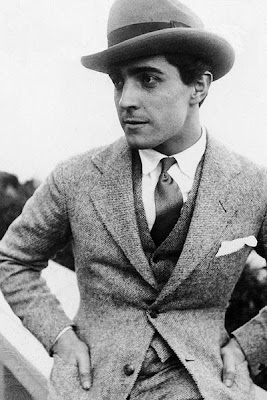 "The leading men of silent films were Adonises and Apollos." ~ Ramon Novarro
Posted by Jessica Wahl at 7:00 PM