As I have said many times before, I love the Mack Sennett Bathing Beauties. They are lovely gals who represent the simpler and more endearing times that was silent film and comedy. These aren't girls walking around with their tops off and have huge fake boobs, no, these are fancy free flappers!

There are some well known actresses that started out as Bathing Beauties and went on to have their own stellar career in silents and beyond (for some). Famous Beauties include Gloria Swanson, Marie Prevost, Phyllis Haver, and Carole Lombard. But, for this entries, I want to focus on the girls that maybe only appeared in a few silent comedies and then faded into celluloid history. I want to highlight the lesser known gals who we can still view in the hundreds of pictures available from the silent days.

Now, these entries are going to be done in groups in separate entries...if that makes sense. Finding information on these girls can be difficult, but I will give you as much info as I can find! If YOU have additional information on the girls, please don't hesitate to let me know! 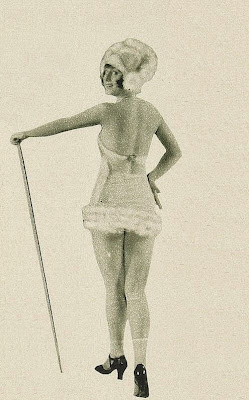 Andre Bayley (billed as "Andre Bailey") was born Andre Temple Bayley on January 26, 1903 in Alabama. She was the eldest child born to Eugene, a claims investigator for a rail road company, and his wife Julia. She had two younger brothers named Owen and Caldwell who were born two and three years after her, respectively.
Judging by the census records I viewed, I believe her father died when she was still a child because he is not listed as living with the family in 1920 and her mother is listed as "WIDOWED."
In 1923, Andre was one of twelve unknown actresses in Hollywood selected by Paramount Studios to be given contracts and made over into glamorous starlets. It seems that this wasn't a very well thought out idea because I didn't recognize any names besides Andre's in the list of the girls chosen. Some of the girls appeared in a few pictures here and there, but none of them became the up and coming star they were hoping to be. Andre's career lasted only for about two years and consisted of around 16 films, mostly in a minor role...like a Bathing Beauty!
I don't know anything about her personal life or what happened after she left Hollywood, or even why she left. All I know is that she passed away on February 1, 1984 and is buried at Forest Lawn in Glendale near her mother and her brothers.

Meet Margaret Cloud! All I know about her is that she was chosen to be a Bathing Beauty in 1923 by Mack Sennett himself along with Elsie Tarron and Cecile Evans.
Her career lasted for about five years with 15 film credits, mostly in a minor role of a Bathing Beauty.
I think she was sometimes credited as "Peggy" because I have seen some pictures of Bathing Beauties with that name, and as far as I can tell they are one in the same. 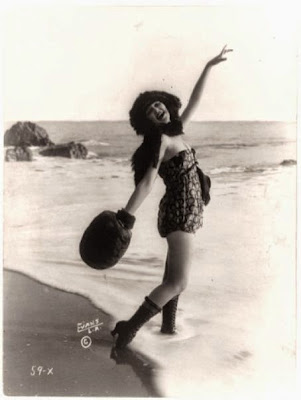 Alice Maison was born on February 20, 1900 in Detroit, Michigan to Minnie Clark Maison. I cannot find a name of a father in any census records which leads me to believe he either deserted soon after Minnie became pregnant or that he passed away. I did however find out that Alice had an older sister named Carol. It's the little things...
Alice was one of the original Bathing Beauties, earning her first film role in 1917 as "Dancing Girl." Like her fellow Beauties, her career lasted only a few years with roles consisting of being screen eye candy.
Her real talents were highlighted on the stage where she was a fairly well known dancer. She trained from a young age with famed instructor, Ernest Belcher (actress Lina Basquette's stepfather). In fact, one of her earliest dance partners was a young Rudolph Valentino! She later toured with fellow dancer, Charles Stuart, who would end up being her second husband (only real proof of this is her name being "Alice Stuart" on the 1940 census record and she reportedly is buried under that name). Her first husband was producer Elmer C. Floyd who she married in 1919, and, if you believe the rumors, the two had only known each other for a day. However, I don't believe this to be true because from what I have read the two met and worked together and he was helping her in her career. This obviously took longer than 24 hours. Alice ended up filing for divorce after only six months of marriage due to Elmer's numerous infidelities.
Alice passed away on February 9, 1976 and is buried in Forest Lawn in Hollywood Hills. 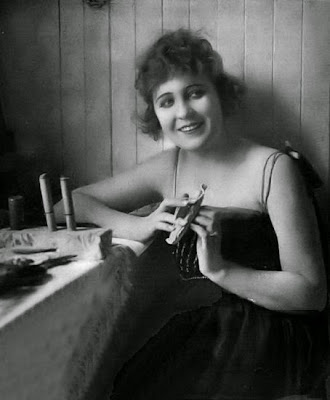 Alatia Marton was born Alatia Lee Marton on September 15, 1894 in Dallas, Texas. She was the only child of Harry Marton and Clara Davis.
While working as a telephone operator, Alatia got her big break after she won a "Beauty and Brains" contest held by Photoplay Magazine and the World Film Corporation. The winning girls were whisked away to New York and Hollywood where they were promised to be made into glamorous movie stars!
"I feel very highly complimented at being chosen a winner, and assure you I will let nothing stand in the way of my taking advantage of this great opportunity," Alatia told Photoplay magazine in August of 1916.
But, again, doesn't look like the contest panned out the way the studios hoped because none of the 13 or so girls chosen really made a huge splash on the screen. Alatia was at one point offered a role as leading lady to Douglas Fairbanks, but the film she was currently working on had yet to be finished, so the role went to another actress. What could have been...
All in all, she had a film career that lasted almost a year and appeared in only about eight films. In 1918, she married a man named Marcus Plowman, quit Hollywood and moved back to Dallas. The couple had daughter named Alatia Jane in 1919 and they remained married until his death in 1944. Alatia herself passed away on June 4, 1972 and is buried next to her husband in Greenwood Cemetery in Dallas.