So, technically Rosie and Jenny Dolly weren't movie stars, they were stars of the stage. But, they appeared in a few films and I love them, so I am putting them in here.


And again...my blog, my rules. MUAHAHAHA!


I began reading about theses two lovely ladies when I was looking into the Ziegfeld Follies. I picked up a book about them called "The Delectable Dollies" and really became a fan. Usually when I cover sisters, each one gets their own entry. However, Rosie and Jenny appeared together the majority of the time, so it is hard to really separate the two without covering the same things over and over again.

Rosie and Jenny Dolly were born Rosika and Jansci Deutsch (I have also heard Roscizka and Janszieka) on October 25, 1892 in Hungary. They came to the United States in 1905. They also had a brother Eddie who performed as well.

They began making the rounds as dancers and were appearing on stage to earn money. They were soon banned in New York for working underage, and so they took to touring.


In 1911, they signed up with the Ziegfeld Follies. They danced together on stage most of the time, but sometimes they danced with other partners in order to have a dance off with one another.

Jenny was the wilder of the two sisters and enjoyed romancing the stage door Johnnies that paid her visits and she loved diamonds. She even had affairs with Kings and Princes from many European countries.


I have heard rumors that they appeared in a lot more films then they actually did. The Million Dollar Dollies was made in 1918 and that was the most recognized of the two films. And I am not 100% sure if these films are available, but I am guessing not.


In 1933, Jenny was involved in a car accident that left her face scarred. She had to go through multiple surgeries to try and repair the damage, but it affected her a lot more on the inside. She had previously invested a lot of her money and jewelry and gained quite a fortune from it, but she had to use this to pay for her surgeries. So the scarring and dwindling finances left her very depressed.

Jenny Dolly committed suicide on May 1, 1941. She hung herself in the shower at the hotel she was staying at. She was interred at Forest Lawn Glendale in the Great Mausoleum.


Of course, Rosie was devastated at the loss of her sister. When she sold the rights to the Dolly Sisters story, she had a stipulation that Jenny's suicide or Jenny's daughters be mentioned to protect privacy.


The "bio-pic" The Dolly Sisters starring Betty Grable and June Haver was made in 1945. I have seen the film and while it is cute, it pretty much has nothing to do with the real story of the sisters. I mean, Betty and June are blondes...so, yeah...But, back in those days all bio-pics had to have was the title and character names and they could just make up their own story! 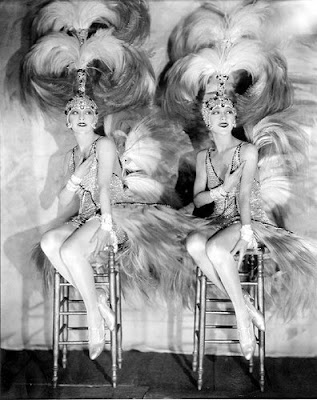 Rosie tried to commit suicide in 1962, but thankfully she was unsuccessful. She lived for a few more years and eventually passed away on January 1, 1970 of heart failure. She was interred with her sister at Forest Lawn Glendale.


Jenny Dolly married twice. First was to Harry Fox in 1914. They divorced in 1921. Her second and final marriage was to Bernard Vinissky in 1935. They stayed married until her death, although they were separated at the time.


In between her two marriages in 1929, Jenny adopted two girls from her home country of Hungary.


Rosie for a time was being romanced by Diamond Jim Brady. He once gave her a Rolls Royce covered in ribbons. And apparently both girls had an affair with Harry Gordon Selfridge in 1918.

While in the Follies, the girls befriended fellow showgirl Olive Thomas. In 1920, Olive invited Rosie on a trip to Paris she was making with her husband Jack Pickford. Rosie declined the offer, and on this trip is when Olive ingested the lethal mercury bichloride that killed her. Rosie did have a chance to see her friend in the hospital before Olive tragically died.


I think I found a way to figure out which sister is which in pictures. People say that the girls always posed with Rosie on the left and Jenny on the right...maybe that is fact, but I don't know. From what I have seen, Rosie had wider eyes than her sister, so that can help figuring out who is who sometimes.
Posted by Jessica Wahl at 11:10 AM