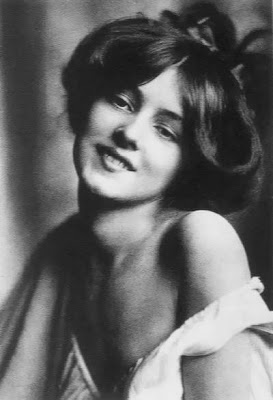 This entry is another one of those that is more appreciation rather than silent film stardom status. I got into reading about the Evelyn Nesbit/Harry Thaw/Stanford White saga about a year ago and it really was quite an interesting little story. First of all, the pictures of Evelyn are just beautiful. She really was a beautiful, very photogenic young lady. She just got herself involved in one hell of a love triangle! One that unfortunately was very high profile and led to her being branded with a negative light from the media and from the public.


As far as reading about her more, I recommend the book "American Eve" by Paula Uruburu. It is not only about Evelyn, but also about the whole Stanford White ordeal. It was a really great read. I also really did enjoy the movie The Girl in the Red Velvet Swing with Joan Collins. I thought it was a pretty cute movie. I have also seen a little documentary called The Crime of the Century that was also very good. 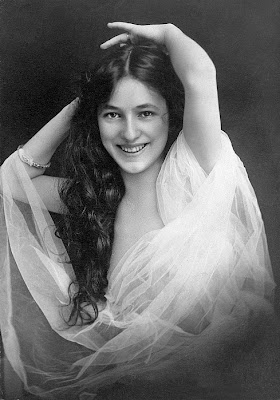 Evelyn Nesbit was born Florence Evelyn Nesbit on December 25, 1884 in Tarentum, Pennsylvania. She was later joined by younger brother Howard. When she was around 8 years old, her father Winfield passed away, leaving the family with a mound of debt. As a result, the family had to live in poverty. Evelyn soon began getting jobs working as an artist model.

When she was 16 years old, her family moved to New York City where she continued working as a model. Her mother was having a tough time finding a job, so it was up to Evelyn to bring home the money. Pretty soon she was in high demand, working for such artists as James Carroll Beckwith and Rudolf Eickemeyer Jr. 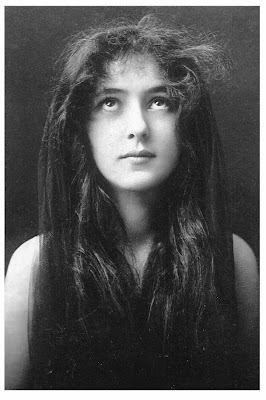 After Charles Dana Gibson immortalized her in a drawing called "The Eternal Question," (her hair was shaped and styled to look like a question mark) she became even more famous. She was also ranked the most famous of the Gibson Girls. I have seen pictures of other Gibson works, and I don't recall seeing any of them named...so...oh well.

With her new found fame she decided to move on to the stage as a showgirl with Florodora. It was here she befriended fellow showgirl Edna Goodrich, who in turn introduced her to architect Stanford White in 1901. He was 47, she was only 16. 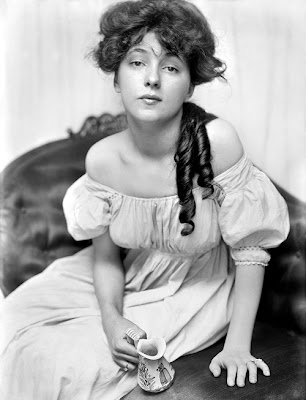 "Stanny" (as she called him) had a swanky little hidden apartment above toy store FAO Schwarz that came with a red velvet swing...which, I mean...doesn't every apartment? Apparently he enjoyed watching young ladies swing naked from the swing.

How did this relationship with such a huge age gap get by mother Nesbit? Well, simply by having Stanny buy her off. He paid for her son, Howard to get into a prestigious military academy. He also showered both mother and daughter with gifts.


One night after drinking quite a bit of champagne, Evelyn apparently passed out and woke up in pain, naked, next to Stanny. She later recounted that she "entered the room a virgin but did not leave one." She never really came out and said he raped her, but it was pretty apparent. She always said she loved him, so she was probably just trying to protect his reputation.

When she realized that Stanny had a wondering eye, she began to venture out for new beaus as well. One of them was famous Broadway actor John Barrymore who she met in 1901. Amazingly, her mother was not happy with this arrangement even though the two were the same age. Stanford White of course was not happy that his favorite girl had eyes for another. Barrymore even proposed to Evelyn in front of White and Mrs. Nesbit, but she turned him down. She was eventually sent away to a boarding school and that was the end of that.


Then came Harry Thaw. He was obsessed with Evelyn and with her relationship with Stanford White. He liked his cocaine and was also abusive towards Evelyn...and little boys (Warning bells!) For some reason Evelyn was blind to this and agreed to marry Thaw in 1905. She was only 20 years old.


One year later Evelyn's world came crashing down. On June 25, 1906 she and Thaw went to a show on the roof of Madison Square Garden. Also in attendance at this performance was the building's architect and Evelyn's former flame, Stanford White. During the finale, Thaw got up from his seat and shot Stanford three times in the face, killing him instantly. The crowd at first thought it was part of the elaborate production but soon saw that Stanford was indeed dead and they began to panic. Thaw though walked calmly over to Evelyn and told her that he "just saved her life."

The trial surrounding the murder was a nightmare! During the first trial, the jury was deadlocked and could not decide whether or not Thaw was guilty or not guilty. The second trial had Evelyn taking the stand on behalf of her husband saying that it was temporary insanity. She did not want to get on the witness stand at all, but was forced into it by her mother-in-law who said that if she did, she would get a nice, quiet divorce and a hefty cash settlement. She did get the divorce, but no money. And after Thaw was acquitted of the murder, she was totally cut off from the Thaw fortune.


Even though he was acquitted, he was sent to a mental asylum that was pretty lax on him...although he tried to escape a few times. He was released "sane" in 1915. He was back in an asylum after being accused of sexually assaulting a young boy but was released in 1924. He died in 1947, and surprisingly he did leave some money to Evelyn, $10,000 to be exact.


After the circus of the trial, Evelyn wanted to stay out of the spotlight, but she had to go back to performing because she was broke. She danced on Broadway and appeared in a few silent films but was not very successful. She moved to New Jersey where she battled alcoholism, an addiction to morphine, and made numerous suicide attempts.

Evelyn Nesbit passed away on January 17, 1967 in Santa Monica, California.


She was interred at Holy Cross Cemetery in Culver City, California. I went there and the directions I wrote down for myself to find her grave were kinda vague so I could not find her grave. I was bummed :( 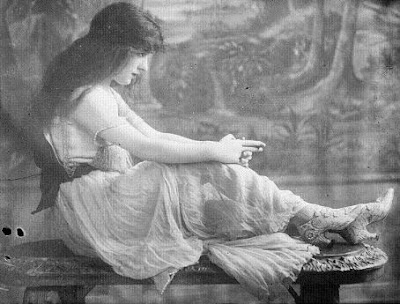 Evelyn married another time after Thaw. She married her dancing partner Jack Clifford in 1916, but sadly he left her two years later. They weren't divorced until 1933.

She had one child, a son named Russell William Thaw born in 1910. She claimed that Thaw was indeed the father, but he always doubted it considering the fact that when the child was conceived and born, he was in jail. Well then!


She worked as a technical advisor for the 1955 film The Girl in the Red Velvet Swing.

"Stanny was lucky, he died. I lived." ~ Evelyn Nesbit
Posted by Jessica Wahl at 4:56 PM