I love him. Love him, love him, LOVE HIM! I figured I needed to add some male stars to this blog, and what better way to start it off with the man himself, Buster Keaton. I could write an entire blog about just him! The man is a genius. Definitely the hands down winner between him and Charlie Chaplin as to who was the leading silent film actor. Buster did his own stunts, incredible stunts at that! He had funny, innovative films, and he was a genuinely good guy. Whereas Chaplin, well...he had his own agenda...and he liked the young, YOUNG ladies. Buster needs to be recognized more for his incredible talent, not only as a an actor, but for the man who wrote and directed his own shorts. I wish the studio system would have realized how amazing he was instead of using him to help jump start Jimmy Durante's career. But, it is what it is. Oh yeah...and he was gorgeous!! Those abs! That amazing body!! CHEERS!


Guess what my first son's name is going to be? You guessed it! Keaton.

He was born Joseph Frank Keaton IV on October 4, 1895 in Piqua, Kansas to Joseph and Myra Keaton. He was later joined by brother Harry ("Jingles") and sister Louise. His parents were both in the vaudeville circuit. Joe was a talented comedian and Myra was the first woman to play the tenor saxophone on stage.

When he was six months old, the name Buster was given to him. It has been widely speculated that it was Harry Houdini that gave him the nickname after he saw him fall down the stairs and proclaimed "That was a real buster!" But, it has also been stated that his father gave him the nickname...so...either way, he was then known as Buster Keaton.

At age 3, he joined his parents on stage. They billed themselves as "The Three Keatons." The main gist of the show was little Buster finding new ways to disobey his father, and Joe would find new ways of punishing the young boy. The favorite form of punishment was Buster getting tossed around stage by a special handle that was sewn into his coat. This "abuse" brought their act to the attention of the authorities. The Keatons would show that Buster suffered no bruises or broken bones, and that he was fine. They even went as far as saying he was a midget. Buster always stated throughout his life that his father was not an abusive man, that it was all part of the act. Joseph Keaton taught Buster how to fall the "right way" to avoid injury.

It was on stage with his parents that Buster developed his signature "stone face." He used to say that he had such a good time with his dad on stage that he himself would start laughing. But, he soon realized that the audience laughed more when he was dead pan. So, his father would say "FACE!" and Buster's expression went blank. (Not only was his expression his trademark, he also had his pork pie hat).

Myra took Buster to New York when he was 21. This is where he met Roscoe "Fatty" Arbuckle in 1917. Joe Keaton was not a fan of the film medium, but Buster was intrigued. He asked Arbuckle for a camera so that he could take it apart and see how it worked. He came back the next day and Arbuckle gave him a role in his short Butcher Boy. The famous molasses scene was filmed in one take. Buster was a natural. It was the beginning of a wonderful partnership and friendship between the two comedians.

Soon after, Buster was given his own studio and started producing his own shorts and then his own features. He wrote his own gags and performed them himself. Even though he had learned how to handle a fall, he still ended up getting hurt doing his own stunts. For instance, while filming a scene for the film Sherlock Jr. Buster broke his neck after falling from a water tower onto a railroad track. He didn't even realize he had broken it until a few years later when he had an x-ray and the doctor asked him when he had hurt his neck. (I love that story!)

Speaking of dangerous stunts, there is the famous scene in Steamboat Bill Jr. where Buster stood in place while the side of house fell down on top of him. The only thing between him and two tons of wood, was a few inches of space. He insisted on being the one doing the stunt. While shooting the scene, many production staff turned around because they didn't want to see Buster being squashed. The scene was done in one take. Buster was unharmed. And the scene is a part of cinema history.

In 1927, he released The General, the film he was most proud of. It combined his two great loves, comedy and trains...with a story about the Civil War thrown in. It cost a lot of money to make, and was not popular when it was released. This disaster caused Buster to lose all control over his movies. He was devastated.

He soon was signed to MGM, a decision he called "the worst of his life." His roles were very restricted. He was usually cast as a bumbling, brainless character, most of the the time named Elmer. He was used as a jumping off board to help bring comedian Jimmy Durante into the spotlight. He also became a gag writer for Red Skelton and the Marx Brothers.

During his later years in had appearances in such films as Sunset Blvd, Limelight with Charlie Chaplin, and his last film, A Funny Thing Happened on the Way to the Forum.

Later during the 1950s, Buster had his own television show, and made appearances on other shows, performing some of his famous gags. He also appeared on This Is Your Life, which was used to help promote the film The Buster Keaton Story starring Donald O'Connor (not the best bio film, but back then they were usually highly fictionalized).


Buster married three times. The first was to Natalie Talmadge, sister of silent stars Constance and Norma. (For the record, this part is going to be quit bias, because I am NOT a fan of Natalie). They married in 1921, and by they, I mean he married not only Natalie, but Norma, Constance, and Mama Peg. They had two sons, James in 1922 and Robert in 1924. Shortly after Robert was born, Natalie and her mother informed Buster that their physical relationship as man and wife was now over. Buster informed them that he refused to live without sex. (By far...my favorite quote from him. Love it!) This was not the only problem. Natalie was also very greedy and wanted to live very regally. He had to take movie roles that he didn't want in order to keep up with living expenses. When they divorced in 1932, she took the boys from him and changed their last name to Talmadge. Buster was crushed. (Again...I do NOT like her!) 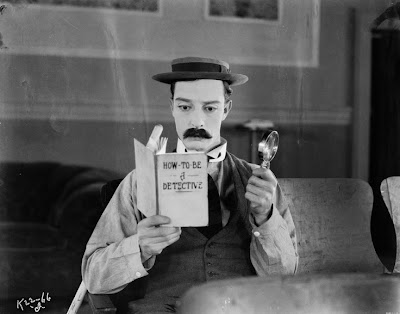 His second marriage to Mae Scriven was during what he called an "alcoholic blackout." So...we can just leave it at that.

His third and final marriage was to me...*j/k* Was to Eleanor Norris. It was a very happy marriage and lasted until his death. She seemed like a lovely lady, always happy to talk about Buster and his career. The lovely Eleanor Keaton passed away in 1998. 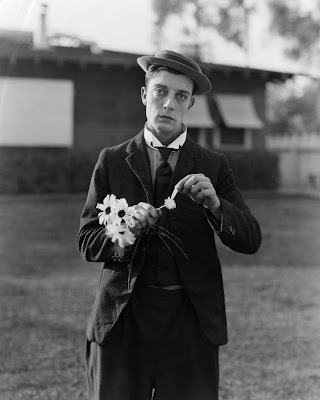 Buster Keaton himself passed away from lung cancer on February 1, 1966 in Woodland Hills, California. He was never told that he was in fact terminally ill, just that he had a throat infection. He was even up playing cards with friends the night before he died. He was interred at Forest Lawn in Hollywood Hills. (I had a chance to visit his grave last year. It was an amazing experience).

"What used to get my goat at MGM were comedians like The Marx Brothers or Abbot and Costello who never worried about the script or the next scene. My God, we ate, slept and dreamed our pictures." ~ Buster Keaton
Posted by Jessica Wahl at 6:27 PM