I had the opportunity to visit the grave of this lovely actress a few weeks ago. Her grave marker has a lovely picture collage of her life on it and I knew I had to do some digging and find out more about this silent film child star, Miss Vondell Darr. 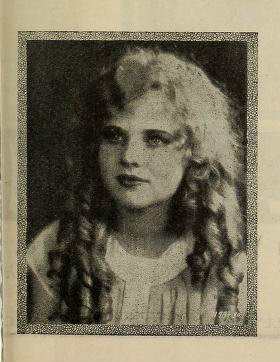 She was the only child born to Ralph Warren Darr and his wife, Homa Dupree Darr. Ralph seems to have jumped from job to job, working as a driver around 1920 and then going to work as a clerk in a department store around 1930. Between 1930 and 1940, he and Homa divorced, and he went back to his home state of Texas where he eventually passed away in 1945.

Vondell got her start in films the way most people hope to, by getting discovered by a big time director. Homa Darr shared a mutual friend with director James Cruze and one day the two met, along with little Vondell. Cruze thought the little girl adorable and just had to put her into his new picture, The City Never Sleeps. And so, 1924 was the year Vondell Darr broke in film!

Later that same year (according to IMDB) Vondell appeared in Peter Pan, which starred Betty Bronson and Mary Brian. I've seen this film, mind you, it was years ago, but I need to go back and visit it to see if I can spot Vondell.


In 1928, she appeared in On Trial, an early talkie for Warner Brothers. The film is considered lost after the negatives were reportedly destroyed in 1948, but a soundtrack still survives in archive. When it was released, the film was panned due to its choppy sound levels and the actors inability to cope with the boom mic. This film is noteworthy, however, because Vondell's role in it made her the first child actor to appear in a talking picture.

Vondell took a break from acting in 1929 so she could return to school. Whether this was her choice or her parents, I'm not sure. Vondell was enrolled at the Holmby School for Girls until she transferred to Beverly Hills High School where she graduated from around 1937. After high school she went to UCLA where she graduated in 1941. I am not sure what her degree was in. All I can find about her non-acting career was gourmet cooking and later a housewife.

Her final film appearance was in The Chocolate Soldier, starring Nelson Eddy, in 1941.

She was buried at Forest Lawn in Glendale.

Vondell was married once, to her high school sweetheart, Fred C. Wilson in 1941. The couple had a very happy marriage that produced three daughters, Sharon (who sadly predeceased both her parents) Marlene, and Rhonda. Fred passed away in 2006, and Vondell is buried beside him.

After retiring from films, Vondell enjoyed cooking, painting, entertaining at home and playing bridge with friends. Her family and friends called her 'Vonnie.'

Reportedly, she was natural redhead. I can't find whether she had her hair dyed or wore a wig.


"I'm not an electrician's daughter but I know watts-watt about Vondell Darr!" ~~ Screenland, August 1930
Posted by Jessica Wahl at 7:56 PM