When it comes to my "job" as a silent film, uh...guru, I have a few pet peeves, or quirks if you will. One of them popped up just the other day on Facebook. A picture was posted claiming to be that of Evelyn Nesbit, the beautiful girl involved in the "Murder of the Century" in the early 1900s. The picture was clearly not of her and people were arguing with me that it was...even when I showed other pictures as evidence. Now, I don't claim to know everything, but when it comes to stars of that era and their pictures especially, I do know my stuff. As I have stated before many times, my goal is to make sure that stars of the silent screen are not forgotten so having a photo of someone being mistakenly identified is just a travesty to me. I am fighting the good fight. Even if I come off as a bitch :)

The other thing that bugs me is colorized photos. I love the beautiful black and white photos of stars so making them look like clowns in colorized photos is just a terrible, terrible crime. Now, there are some photos that I have seen that have had color added and they don't look terrible. Examples: 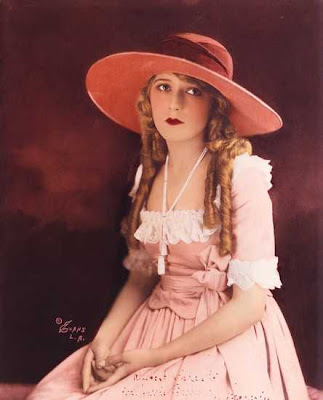 I think when it comes to colorizing a photo, simplicity is key. So, if you feel the need to make a black and white photo come alive with color, please be light handed and do not do an injustice to the memory of these stars...like this: