I had a reader suggest I write an entry about Doris Deane, the second wife of Roscoe Arbuckle. So, I thought...why not write about all three of his wives? After all, they were all actresses too. 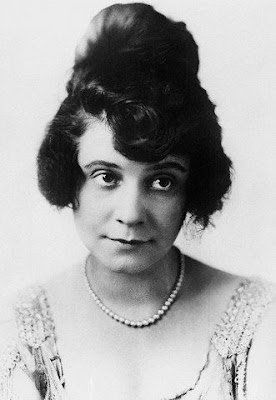 The first Mrs. Arbuckle was Minta Durfee. For the record, I love her name. Her birth name was Araminta Estelle Durfee and she was born on October 1, 1889 in Los Angeles. According to a census record I came across, her parents names were Charles and Flora Durfee. She also had a younger sister named Marie and a younger brother named Saul. Her father worked for the railroads, and her mother apparently made clothes for local prostitutes.

She first met Roscoe when she was appearing in various plays, mostly in the role of chorus girl. They married on August 6, 1908.

Around 1914, Minta and Roscoe started to cut their teeth in the brand new motion picture industry. Her first film role was in one of her husband's many, many shorts, Fatty's Day Off. Later that year, she appeared in the film Making a Living with Charlie Chaplin. She was his first of many leading ladies. She was also one of the few he didn't sleep with.

For the next four years she appeared in more of Roscoe's films as well as her buddy Mabel Normand's more famous films like Tillie's Punctured Romance and Mickey.
﻿﻿

In 1921, Minta and Roscoe separated. It was just a few months later that the Virginia Rappe scandal occurred which changed Roscoe Arbuckle's life forever. Even though they were separated, Minta was 100% on his side. Once when she went to the courthouse in his defense, she was hit by rocks thrown from the angry mob gathered out front.

The couple did eventually divorce in 1925, but Minta only had kind words to say about her ex husband.

Supposedly, Minta and Roscoe had two sons together...which was news to me. I can NOT find out what their names are or anything else for that matter. So...not really sure about this little tidbit.

Later in life she did appear in a few popular movies such as How Green Was My Valley (1941), and The Unsinkable Molly Brown (1964), but they were just minor roles. Her last film appearance was in 1963 in It's A Mad, Mad, Mad, Mad World.

After she retired from acting, she went on speaking tours all over the country talking about silent films and Roscoe's work. She got a kick out of sharing stories about her old film friends, like talking about her grievances against Charlie Chaplin and saying that most of the rambunctious film comedians were really very shy when the cameras weren't rolling.

Minta Durfee passed away on September 9, 1975 at the Motion Picture Country Home.

She was cremated, and her ashes were interred at Forest Lawn in Glendale.

"[Roscoe] was the most generous human being I've ever met, and if I had to do it all over again, I'd still marry the same man." ~~ Minta Durfee

This is an AMAZING site that has an interview Minta did shortly before she died. It has a ton of information and is definitely worth a read. Also involved in the interview is Steven Normand, the great nephew of Mabel Normand. Minta Durfee Interview

Doris Deane was born Doris Anita Dibble on January 20, 1900 in La Crosse,Wisconsin. She was born to Charles, a merchant and saloon worker, and Martha Dibble. I am pretty sure she was an only child.

Her film career was nothing to write home about since it consisted of a little over 10 films. She did have brief appearances in two notable Buster Keaton films though, Sherlock Jr. and Seven Chances. Her last screen appearance was on a television show in the 1950s.

This was not a happy time in Roscoe's life. He had just divorced his first wife only a few months before remarrying, the three trials he had to endure with the Virginia Rappe scandal, and the public had labeled him as an evil man and wanted nothing to do with him or his movies. Not the best time for someone to get involved in another relationship.

Doris filed for divorce in 1928 citing desertion and mental cruelty. The divorce was finalized in August of that same year. When asked about the separation and pending divorce Roscoe said, "We haven't gotten along happily for some time. And, if I've got to be lonesome, I might as well be lonesome here [a hotel]."

She stated to the court that her husband would go to wild parties and get really drunk and try to force himself onto other women. (ARE YA KIDDING ME?!) She said he would also nag her, and verbally abuse her. She even claimed that on the way home from one of these wild parties that he yelled at her and basically called her a whore. *face palm* Another instance has him throwing a woman down and kissing her at a beach party. When Doris went over to confront her husband, he reportedly hit her.

In February of 1929, Doris apparently wasn't finished with her ex husband because she took him to court in regards to alimony allowance. I believe she was asking for something in the $700 range per month.


In 1932, Doris walked down the aisle for the second and last time. She wed Elmer Hartz, an insurance broker. They went through some legal trouble of their own before divorcing in 1934. This time Doris claimed her husband deserted her.

Doris lived quietly after her two divorces. As far as I know, she never remarried and she never had children.

Doris Deane passed away on March 24, 1974. She was found dead in her Hollywood home from an apparent heart attack.

She was buried at the Hollywood Forever Cemetery without a gravestone. To this day her grave remains unmarked.

Apparently Doris once told someone that Roscoe had told her that he didn't think he would ever live to old age because of his weight. Poor Roscoe.

She sometimes spelled her name "Dorris" for her film roles. I am not sure if this was her wish or if it was misspelling on the part of the writer of the title cards.

Addie McPhail was born Addie Oakley Dukes on July 15, 1905 (although a census record states 1906) in White Plains, Kentucky. She was born to Van, an insurance salesman, and his wife, Cordie. She also had an older brother named Hubert.
She made her film debut in 1927 and appeared in films all the way up until the 1940s. Running through the lists of films and shorts she was in, nothing really substantial pops out.
Before she married her famous husband, she did have a brief marriage in the late 20s (I think, there is no wedding date that I can find). She was wed to a songwriter/pianist named Lindsay McPhail. They divorced in 1932, but did have a daughter together named Marilyn.
Addie and Roscoe did in fact know each other through work before they got together romantically. According to Addie, they saw each other on the set for months before they finally had lunch together.
Roscoe and Addie married on June 21, 1932 in Pennsylvania.
Addie really believed in her husband's talents and wanted him to be happy, so to get him back on the good side of the public, they set off on a vaudeville tour. It worked! Jack Warner offered Roscoe a contract to appear in a few comedy shorts under  his own name, none of this William B. Goodrich business.
Things were going very well for the couple both personally and professionally. In fact, the night before Roscoe died of a heart attack in June of 1933, they had been out celebrating their first wedding anniversary. I guess the only positive point to such a quick ending of his life is that he was happy when he did pass away. I think Addie played a big part in that.
I am not sure what happened to Addie after Roscoe died. According to a notice about her death in a newspaper, she did remarry eventually to a man with the last name of Sheldon.

Addie McPhail passed away on April 14, 2003. She was 97 years old. Unfortunately, I do not know where she is buried.

"When I reminded Norma Shearer, Caryl Lincoln, Viola Dana, Stepin Fetchit and others who I was, they would always smile and say something good about Roscoe." ~~ Addie McPhail
Posted by Jessica Wahl at 8:12 PM