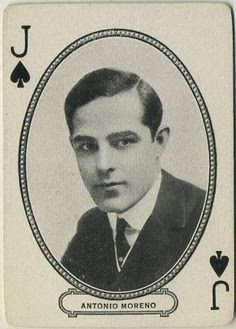 When I first saw Antonio Moreno on screen in the movie It, my first thought was, "Who is the gorgeous man and why have I never seen him before?" This was a few years back when I was just beginning to dive into the world of silent film mind you. Mr. Moreno definitely had the dashing good lucks to rival even Valentino or Fairbanks in my opinion. I admit I still do swoon a bit when I watch It and he comes on screen.


When he was 14 years old, he moved to the U.S. He attended school in Massachusetts and it is here where he began his acting career.


In 1912, he moved to California to work in films. He signed with Vitagraph Studios and worked as an extra. He began to rise in star power when he appeared with Pearl White in her series The Perils of Pauline. He soon was sharing the screen with other big names like Gloria Swanson, Pola Negri, and Blanche Sweet. He was usually cast as the dark, Spanish lover because of his looks...much like Valentino.

Antonio didn't do so well when the talkies arrived. His heavy Spanish accent hindered his star power instead of help it like it did with Greta Garbo. Instead of slipping into depression or finding solace in a bottle, he chose to direct movies in Mexico. He directed four films between 1920 and 1933. These films are considered the best of that era in Mexico.


After his stint as a director, he returned to the states to make brief appearances in film, most notably in 1955's The Searchers with John Wayne. He retired from film soon after.

Antonio Moreno passed away of a heart attack on February 15, 1967 in Beverly Hills.


He was interred at Forest Lawn in Glendale, California.


Antonio only married once, in 1923 to Daisy Canfield Danziger. The marriage ended in 1933 when Daisy was killed in a car accident, although technically the two were separated at the time. They did not have any children.


"To see ourselves as others see us...this should doubtless be the way to write a story of one's own life. But it is so hard to know how others see us, even as a movie actor..." ~ Antonio Moreno
Posted by Jessica Wahl at 8:23 AM