I guess I am in the "silent film actresses who died very young" mode, because I am moving right along to Clarine Seymour. But, unlike fellow tragic actress Lucille Ricksen, there is very little information about Clarine out there. She was a cute innocent ingenue who sadly had her career cut short right when she was beginning to rise. 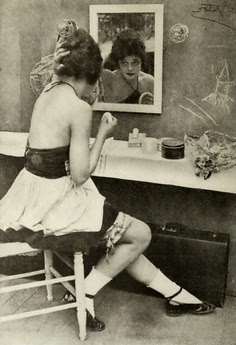 Clarine Seymour was born on December 9, 1898 in Brooklyn, New York.


Her family was well off until she was around 18 years old when her father had to sell his business due to an illness. So, in order to earn her and her family money, she approached the Thanhouser Film Company in order to get work in film.


From Thanhouser she moved to Pathe' where she appeared with Pearl White in one of her series's episodes. From Pathe', it was time to move to California!


She thought her career was over when the film company she was with sued her for not performing in the films she was assigned to. The truth was that the films weren't successful, so Clarine didn't want to be a part of them anymore. She won the case and thankfully her career was not over. Instead, she met the man himself, D.W. Griffith.

She appeared in four Griffith pictures: The Girl Who Stayed Home, True Heart Susie, Scarlet Days, and The Idol Dancer. The pictures themselves were not well received, but Clarine's performances always garnered great reviews.


In early 1920 she began work on what would have been her fifth Griffith film, Way Down East. But, sadly she never got to complete the film and she was replaced by Mary Hay. Co-star Lillian Gish did later on say that Clarine can still be seen in the film in long shots.

Clarine Seymour died suddenly on April 25, 1920 from an intestinal condition. She was only 21 years old. Lillian Gish said she thought that Clarine had died from exposure due to the freezing cold weather while filming Way Down East. Either way, it was a tragedy.


She was buried in Greenwood Union Cemetery in Rye, New York.


At the time of her death, she lived with her parents and a four year old brother in Hollywood.

"I think what people call luck is really, in reality, destiny. I don't think that there is such a thing as unpurposeful 'luck' in the world!" ~ Clarine Seymour
Posted by Jessica Wahl at 3:22 PM