This young actress came to my attention via a picture I saw on Pinterest. 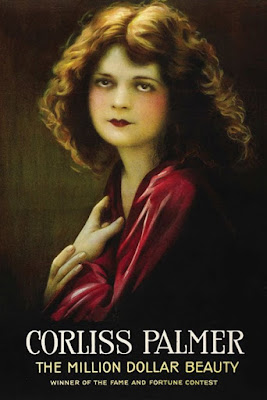 Her name was not one I was familiar with and actually when I first saw the picture I thought it was of another actress like Constance Binney or Mary Astor until I saw the name 'Corliss Palmer.' I immediately looked her up on both IMDb, just to get a little information and I tell you what, the tip of the iceberg was enough to make me want to dive deeper in the life of this virtually forgotten silent film actress who was once called "The Most Beautiful Girl in the World." 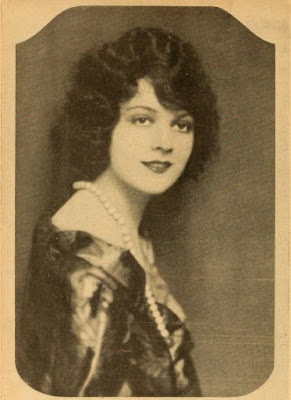 Corliss was born Helen Caroline Palmer on July 25, 1899 in Edison, Georgia. She was the second daughter born to electrician/machinist, Luther Martin Palmer and Julia Alma Farrell. Corliss joined older sister Mary and shortly after her birth they were joined by brothers Hoke (died in 1919, possibly from war wounds), Grady, and Stanton and sister, Emma Ines.

Shortly after her husband's death in 1910, Julia remarried to a man named James Simone and had three more children: Katherine, Julia, and James Jr. 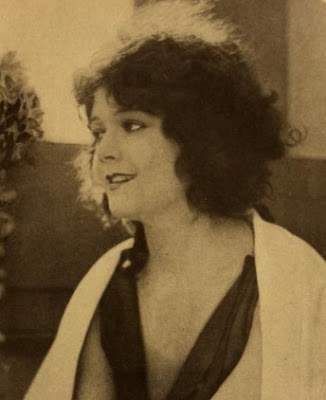 Corliss was never one of the young girls who dreamt about stardom. In fact, her entrance into films was the result of a whim, one she didn't have much faith in. One day while sitting around with a group of her girlfriends having tea, one of the girls mentioned a Fame and Fortune contest being held by Motion Picture Magazine. She suggested that they should all submit their photos for the contest because first prize was a film role and two years of publicity. Corliss found an old picture of herself (or as she called it, 'antiquated') and decided to use that one to send in to the contest. She didn't think much of the contest, so after she sent the photograph in she basically forgot about the whole thing.

A few weeks later, however, she received a phone call from the magazine asking her to come out to New York as she was one of the potential winners of the contest. She would later say that she really only accepted the invitation because she had planned on heading that way to visit an aunt and figured since she was in town... 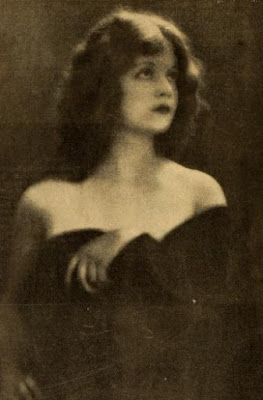 Well, lo and behold! The Hollywood fairy tale comes true! Corliss ended up winning the contest! Her picture was voted the most beautiful and she was deemed to have the most potential after she met with the contest judges which included Mary Pickford, Tom Ince, Carl Laemmle, and Olga Petrova (to name a few.) It is interesting to note too that the second place winner was Allene Ray, who became a close friend of Corliss and had her own career in films. One of the other girls who didn't win, but was given a film contract anyway, was a young Mary Astor. Looks like the judges did a pretty good job picking out some winners!

"I have to pinch myself every now and then to be sure I'm not just down home. The judges gave me the highest mark, and the next thing I heard was that I was the winner. At first I had a hard time persuadin' my mother to let me come back up to stay. I just had to tell her that I must go - it was my big chance - and when she saw how much it meant to me, how much in earnest I was, she reconciled to it and now she is interested and proud and please as I am." -- Corliss Palmer, Motion Picture Magazine, March 1921 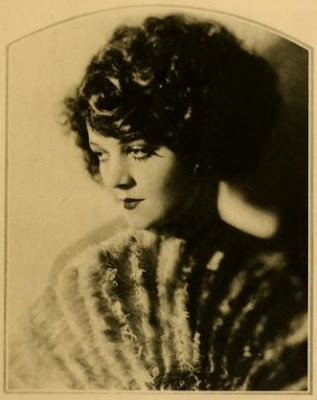 Corliss made her film debut in 1922's From Farm to Fame. The film also starred Mary Pickford, Lillian Gish, and Hope Hampton all playing themselves. This two-reel comedy was specifically written and made for the contest winners. I mean, the title kinda says it all.

Her film career wasn't anything stellar, about 16 film credits from 1922 until 1931. Some of her films included Her Second Chance (1922) with Anna Q. Nilsson, Bromo and Juliet (1926) with Charley Chase and Oliver Hardy, The Return of the Boston Blackie (1927) with Strongheart the Dog, and Polly of the Movies (1927) with Jason Robards Sr. and Gertrude Short. 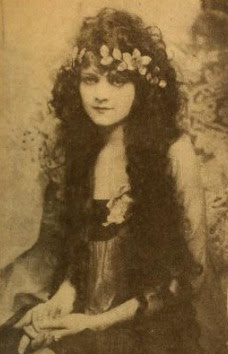 "I want to touch the heart-strings, emotionally. I want to have something of the same appeal that Lillian Gish was in her Anna in Way Down East. I want to make people conscious of their sympathies, their potential sorrows, and I want to do it beautifully and tenderly." -- Corliss Palmer, Motion Picture Magazine, March 1921

In 1928 she appeared in a series of Technicolor documentary shorts about the latest fashions of the time, modeled by various up and coming actresses. Joan Crawford, Billie Dove, Dolores del Rio, and Sally Blane (among others) also appeared in these shorts.

One of her pictures caused quite a bit of scandal and was even banned in at least one city, Cincinnati (it may have even been the whole state of Ohio.) Scarlet Youth (1929) was advertised as "THE MOST VIVID SEX PICTURE EVER FILMED!" and "Because of the intimate treatment of the sex theme: FOR MEN ONLY!" In fact, some Los Angeles theaters only offered the film for women Monday through Friday and for men only on Saturday and Sunday. 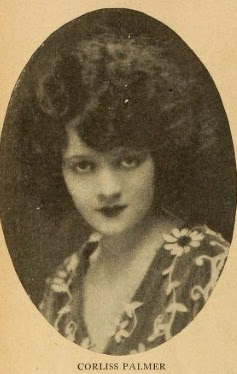 Was the film all it was cracked up to be? Did women faint in the aisles and did the men turn into sex crazed maniacs upon viewing this vivid sex film? Not so much. One critic wrote, "Supposed to have a big social message; one of those medical films that plays to 'men only' and 'women only' audiences. Don't let them kid you. It's just to get the easy money off anyone simple enough to be taken in by the sensational advertising." (Photoplay, June 1928) Unfortunately, I believe the film is lost because I can't find any other information about it. Aside from Corliss, I don't recognize any other cast member's name that appeared in the film. 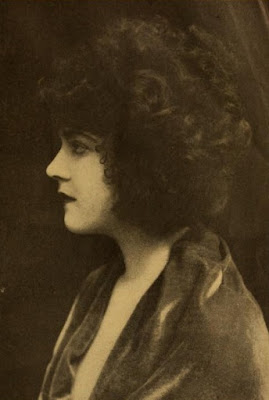 Corliss's greatest passion was not in the movies, but rather in the beauty industry. She wrote beauty articles for Motion Picture magazine with topics ranging from exercise, teeth cleaning, and skin and hair care. I must say they are pretty good articles, save for the somewhat old-fashioned tips and the sometimes flowery language like, "Every girl is born a princess, blessed by the fairies with beauty, health, joy, charm.
(Motion Picture Magazine, April 1921)

On top of her magazine articles she also created her own beauty line that included lip and face rouge, foundation, vanishing and night cream, and beautifier (fancy word for lotion.) She also had Corliss Palmer Peach Bloom Powder and her own perfume which she of course named, 'Corliss Palmer.' The tag line she used for her beauty line was, "Impressions are lasting - look your best at all times." Poetic. 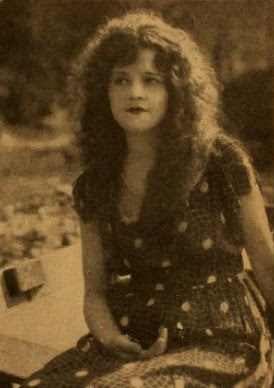 "Once it was considered wicked for a woman to be physically attractive, then it was conceded that there was no harm in being beautiful, but now beauty is an absolute necessity for every woman." -- Corliss Palmer, Motion Picture Magazine, April 1921

In 1933, Corliss was hospitalized for alcohol abuse under the alias 'Edith Mason,' a name she had adopted when she was trying to get back into films. It was just the beginning of her dealings with hospitals, asylums, and severe alcoholism. 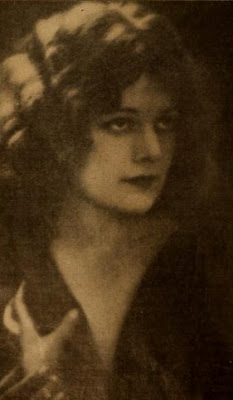 Corliss Palmer passed away on August 27, 1952 in a state mental hospital in Camarillo, California. From what I have read it seems that her cause of death was never released, but I am assuming it was the effects of alcoholism that weakened her.

Corliss was buried in an unmarked grave in Woodlawn Cemetery in Santa Monica, California next to her brother, Grady who died two years prior. Their mother, Julia, would be buried next to them when she passed away in 1967. 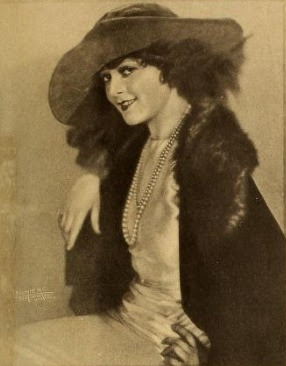 What made Corliss a well-known name during her lifetime was not her film career but rather her personal life. I guess the same could be said for a lot of people in the entertainment industry come to think of it.

Corliss was married twice, with her first husband being magazine publisher Eugene Brewster. My guess is that the two first met when Corliss came to New York for the Motion Picture Magazine Fame and Fortune contest, seeing as Brewster was the owner of the magazine and also one of the judges. He seemed to take a liking to the young girl because he did what he could to help advance her career and getting her product endorsements.

There was a tiny problem, however. Brewster was married. This little tidbit came to the public's attention in 1924 when Eleanor Brewster sued her husband for divorce and cited Corliss as the woman who alienated her husband's affections. Mrs. Brewster won her case in March 1926 and was awarded $200,000 in damages. Shortly after the verdict was announced, Mrs. Brewster made a statement to the New York Times regarding her side of the story:
"They were together a great deal of the time. She lived right in our home and at last her attitude toward me became indifferent and insolent. I tried not to notice this, but finally could no longer ignore it...He [Eugene Brewster] admitted at this time also that he was a little infatuated with the girl...He also told me Miss Palmer had insisted he should not show any affection towards his wife...I at last told him I couldn't stand it any longer and he deserted me." She then went on to say that Corliss was eavesdropping on the conversation from behind the door and eventually burst in just to taunt her. 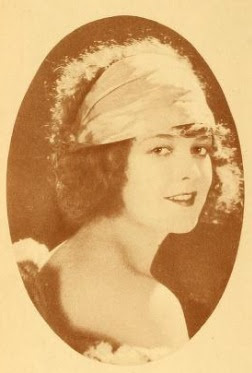 Corliss didn't object to the verdict and seemed rather nonplussed. It was reported in the presses that when she first heard of the allegations against her she told everyone she was going to just ignore it. Ignoring such a case is close to impossible and eventually Corliss had to face reality. Later in 1926, she had to sell off some of her effects in order to pay off the settlement. She would eventually file for bankruptcy.

Twenty-four hours after his divorce from Eleanor was finalized in October 1926, Eugene Brewster and Corliss were married in Ensenada, Mexico. The witnesses to their nuptials were friend Allene Ray and her husband Larry Walker. The two would again exchange vows in the US to make sure the marriage truly was legal. 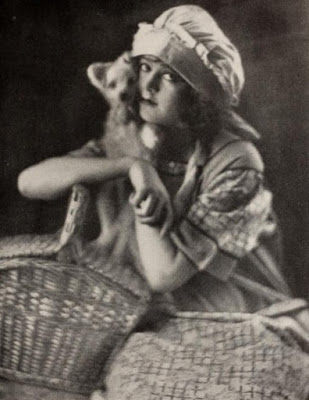 Not surprisingly, the couple would eventually divorce in 1933 with Corliss charging Brewster with cruelty. Brewster's millions (get it?!) had severely dwindled following his divorce from Eleanor and was getting smaller and smaller during his years with Corliss. He would go on to marry at least once more before passing away on New Year's Day 1939.

Corliss couldn't catch a break...or couldn't seem to stay away from married men. In 1932, she was once again dragged into a divorce suit, this time by Estelle Cohen, wife of tennis player and theatrical manager, Albert J. Cohen. Corliss defended herself this time saying that she and Cohen were just friends and she was under the assumption that he was married and when she found out he that was married, she stopped seeing him personally. The two still saw each other, but only when it involved business considering Cohen was her manager. I am not sure of the outcome of this case. 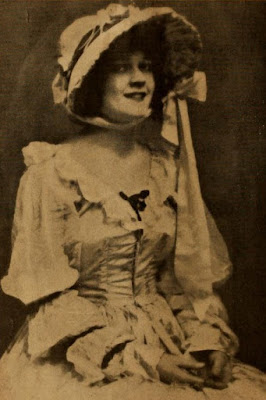 Corliss's second husband was cowboy William Taylor. I don't know any more about their marriage, unfortunately.

"Well, I didn't expect this [a film career]. I suppose I just expected to get married and have a home sometime - somewhere. But it was very far off in the 'sometime,' because I've never been in love, in my life, never have seen a man I could love - and almost everything was dreams to me - everything was someday. But now someday is today and I mean to make the most of it." -- Corliss Palmer, Motion Picture Magazine, March 1921 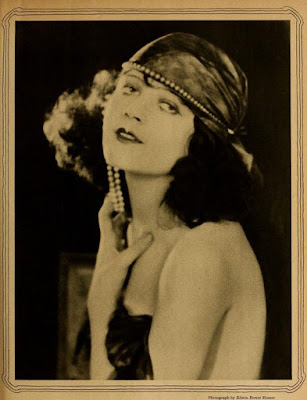 Here is the fashion documentary that Corliss appeared in. I am absolutely in love with this and seriously wish I could play it on loop as moving art in my house.