There are many, many, many Ziegfeld Girls that have faded completely into obscurity. They live in pictures, yes, but there are even some who survive in pictures but aren't named which is quite sad. So many girls came and went through the Follies ranks and only a few found stardom. I wanted to point out a few of my favorites besides the ones I have written about previously. Again, I cannot recommend Jazz Age Beauties enough. Also, a website called "Historical Ziegfeld" that I am a part of. It is run by a wonderful gal named Jane who has an enormous collection of Alfred Cheney Johnston Ziegfeld photos, clippings, etc! It is a wonderful site and so many knowledgeable people to talk to. 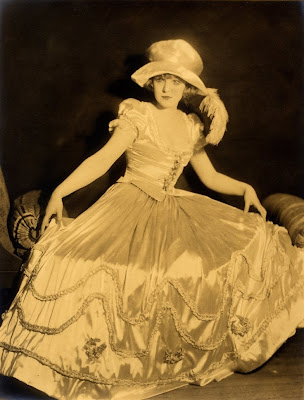 Allyn King was a tragic figure in the history of the Follies. She was one of the many girls who was hit by the so-called "Ziegfeld Curse." She was born in the early 1900s to a doctor and his wife in North Carolina. She joined the Follies when she was 17 and appeared in the Ziegfeld Follies of 1916 all the way through 1920. She was also part of his Midnight Frolic show.

Her career came crashing down on her after Broadway big wigs commented on her weight. She began taking diet pills, going without food and water and sleep just to keep her weight down. In 1926, she was placed in a sanitarium for about 2 years. It was reported in a newspaper that she just "disappeared" one day. She just walked out the door.

She finally had enough and committed suicide by jumping out of a 5 story window. She was staying with her aunt so she could keep an eye on Allyn. Her aunt left her room for only a few minutes, and when she returned, the window was open and Allyn was laying in the courtyard. Miraculously, she didn't die right away from the fall. She had suffered a fractured skull, arm, and leg and doctors expected her to pull through and survive. Unfortunately, she passed away on March 30, 1930. Poor girl.

Sadly, her funeral was lacking her Broadway/Follies friends. Although, Marilyn Miller did sent a bouquet of flowers that were placed on her casket.

Allyn was once an understudy to Ina Claire and replaced Justine Johnstone after Justine threw a fit and quit when Ziegfeld wouldn't let her entertain male guests in her dressing room in 1916. 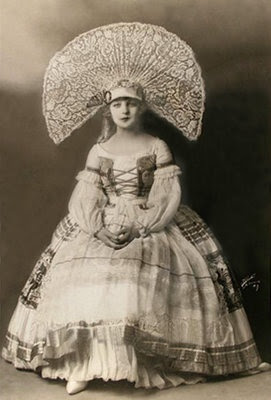 This is an excerpt from the contract she had to sign to appear on the stage: “It is expressly made a part of this agreement, and is an essential part thereof, that if at any time you should, during the term of the said arrangement, increase in weight more than 16 pounds or decrease in weight more than 10 pounds, or let the dimensions of any part of your figure vary more than one-half inch from the following: weight 115 pounds, neck 12 1-2 inches, bust 34 inches, upper arms 11, lower arms 7 1-2, waist 26, hips 34, thigh 18, calf 12, ankle 3 1-2, then and in that event we shall have the right to cancel this contract upon giving you one week's notice." Unbelievable...

"I'll listen to no more offers of marriage until the war closes. Those I receive by mail will go direct to the wastebasket." ~ Allyn King. She actually stuck with that mantra because she never married. She was engaged for a time to Carl Weidemann, who actually wanted Allyn to give up being on the stage. Her response: "Love me. Love my footlights." Loooove it!! Catherine Moylan was just absolutely gorgeous! And she managed to allude the "Ziegfeld Curse." She was born on July 4, 1904 in Texas. Pretty interesting fact: she beat out Joan Blondell in a Miss Dallas pageant...and then won Miss Universe 1926. She appeared in a number of Ziegfeld productions before eventually trying her hand in Hollywood in the 1930s. She had a bit part in the film Our Blushing Brides as a mannequin (I would kill to get a copy of that movie!). Catherine didn't really score any big roles so she decided to quit show business, get married, and raise a family. She died on September 9, 1969 and is buried in Texas under her married name "Singleton." Also, Catherine was not a shy girl. She had no problem shedding her clothes for photographer Alfred Cheney Johnston or donning revealing costumes on stage. She was beautiful, so who could blame her for wanting to show it off? In fact, Dorothy didn't even want to be an actress. She found it an obnoxious profession and was pushed into it by her mother after her father died in 1914.

Ziegfeld spotted her in the chorus of an Al Jolson performance and wanted her for his own show. She appeared in a few Ziegfeld productions, including the Follies of 1925. She fell in love with playwright Samson Raphaelson (author of The Jazz Singer) and the two were married for fifty years. They had a son named Joel and a daughter named Naomi. Wegman passed away in 2005 at age 100! She is buried at the Saint Frances Cabrini Shrine Chapel in Manhattan. She was given the nickname of "Dorshka" by fellow Ziegfeld girl, Marion Benda. She was billed under that name sometimes.

Dorothy was also a published novelist. She wrote two books, Glorified, which was published in 1930, and Morning Song in 1948.

To be continued...
Posted by Jessica Keaton at 1:17 PM