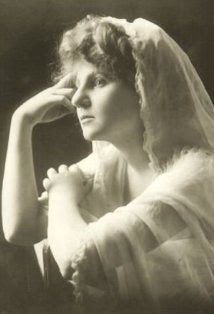 Hollywood's first movie star. Why don't more people remember Florence Lawrence? She is more forgotten today than even Olive Thomas or Jeanne Eagels. I had a chance to visit her grave last year. It was all alone next to a water pump house. But, the epitaph on her grave was so powerful that it made her stand out even more. "The first movie star." I took this picture, and I loved how the sun shined right on the word "first." It helped make the point about how special she was. 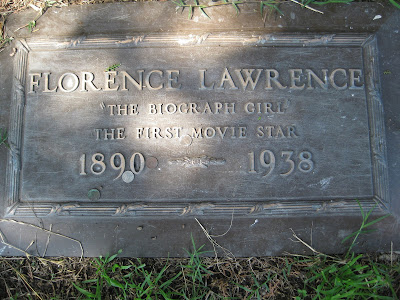 I look forward to visiting her again in May. 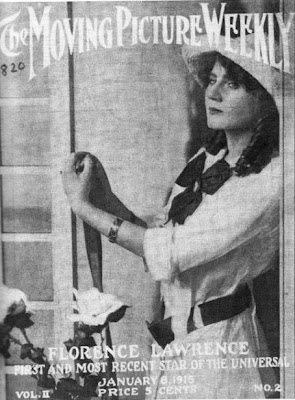 Florence Lawrence was born Florence Annie Bridgwood on January 2, 1886 in Hamilton, Ontario, Canada. Her parents were George and Charlotte Bridgwood, and she had two older brothers. Her mother was a vaudeville actress under the name of Lotta Lawrence. At age four, Florence took her mother's stage last name as her own surname. At age 12, her father passed away, and she and her family moved to Buffalo, New York.


After high school, she joined her mother's stage company, but it soon disbanded. In 1906, she and her mother moved to New York City. She made her film debut that same year.


Along with acting in film, Florence also appeared on stage. She toured for a year in a stage production of Seminary Girls. After the tour, she decided not to "live the gypsy life" anymore and focused wholly on her film work.

One of the main reasons Florence got hired so quickly for films was the fact that she was an excellent equestrian. In 1908, due to this skill, she appeared in 11 films in just 5 months. 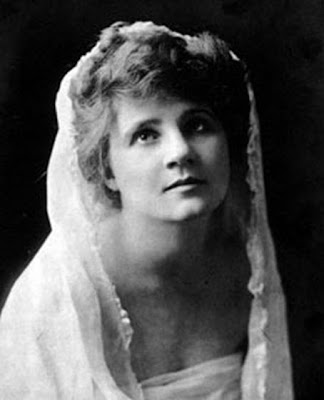 D.W. Griffith was on the hunt for an actress to star in a film he was directing at the Biograph Studios. The role was going to go to another Florence, Florence Turner, but Miss Florence Lawrence managed to persuade Griffith and the film's leading man, Harry Solter to give her the role.


Her part in the film was a success and led to her being cast in more than 60 other films directed by Griffith.


At that time, film stars names were not made public. But fans started writing to Biograph asking about the girl they had seen very frequently in the pictures. Instead of releasing Florence's name, they simply started referring to her as "The Biograph Girl." 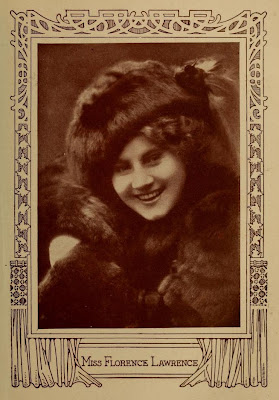 Florence began demanding to be paid by the week rather than by day, which started to anger the studio. When she began looking for work at Essanay Studios, they reported it to Biograph, who promptly fired her. She then joined with the Independent Moving Picture Company of America, or IMP. They were the ones who put her name on the marquee for the first time, making her the first star to be known by their real name. IMP founder Carl Laemmle got the publicity train going by starting a rumor at their new star had been killed in a street car accident. (Umm...nice one Carl?) They later printed out ads saying that Florence was indeed alive and well and was appearing in an upcoming film! Boom! The star system had arrived!

She bounced from studio to studio making film after film. She eventually realized her dream of buying an estate in New Jersey and gardening roses. She soon announced her wish to retire in 1912. 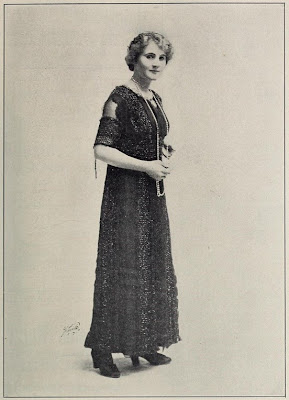 In 1915 though, she had to return to work again. While filming on of these films, she suffered singed hair, burns, and injuries from a fall due to a stage fire. This trauma sent Florence into shock. Even worse...the studio refused to pay her medical bills. She had to take time off to recover from her injuries. She never achieved the stardom she was accustomed to again.


She tried to go back to work in 1916, but she it was too stressful for her. She ended up being paralyzed for four months. She was diagnosed with a rare bone marrow disease, myelofibrosis. When she returned to the screen again in 1921, no one really remembered her.


Like others at that time, she lost most of her money in the stock market crash in 1929. She made a few appearances in films in 1936, but it only paid a small amount of money. Florence Lawrence died on December 27, 1938. She was found unconscious in her Hollywood apartment after ingesting ant paste. She was rushed to the hospital, but died a few hours later. She was interred in an unmarked grave at Hollywood Forever Cemetery. It wasn't until 1991 that she received a proper grave marker. Actor Roddy McDowall purchased one for her, adding to her name and dates, "Biograph Girl and the first movie star." (I just love Roddy!) 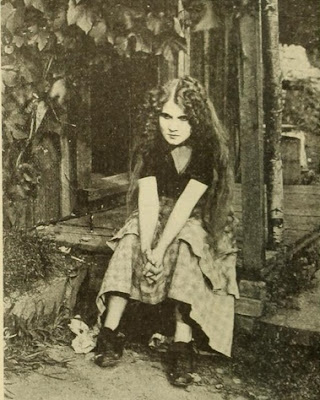 Florence was married three times. First, to her costar Harry Solter from 1908 until his death in 1920. Then Charles Woodring from 1921 to 1932. And finally to Henry Bolton in 1932, but the marriage only lasted 5 months. She never had children.


Florence has been credited with being the inventor of the first turn and brake signal. But, she did not patent the invention, and others jumped on it and succeeded in getting it patented.

This is a very cute short featuring Florence. It is about those big ole hats ladies used to wear to the flickers.

Posted by Jessica Keaton at 8:42 AM